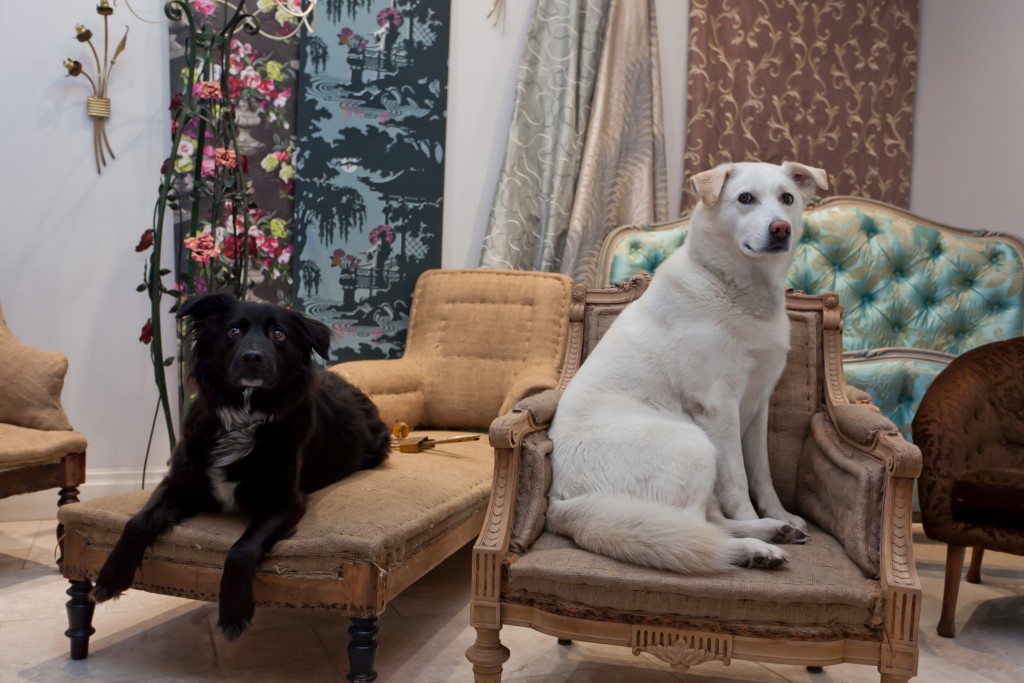 I’m extremely disappointed in myself. I’ve written four whole blogs now, and I’ve only managed to sneak in two measly photographs of my dogs. It’s just not good enough. What sort of mother am I not to share my babies with you at such an early stage in our relationship?! I know it doesn’t really have anything to do with decorating, but I did mention in my introductions that this might happen, so you can’t say you weren’t warned. And anyway, who on earth doesn’t like seeing cute photographs of doggies, especially doggies who go to work for a living. (Apologies for calling them ‘doggies’, I know it’s extremely childish but I just can’t help myself. ‘Dogs’ just sounds a bit harsh to me. As does the word ‘hedgehog’; which gets shortened to ‘hedgie’. And ‘blackbird’ to ‘blackie’…..The list goes on. I share this little quirk with my Mum, and we are constantly being ridiculed by my husband. But we don’t care!). 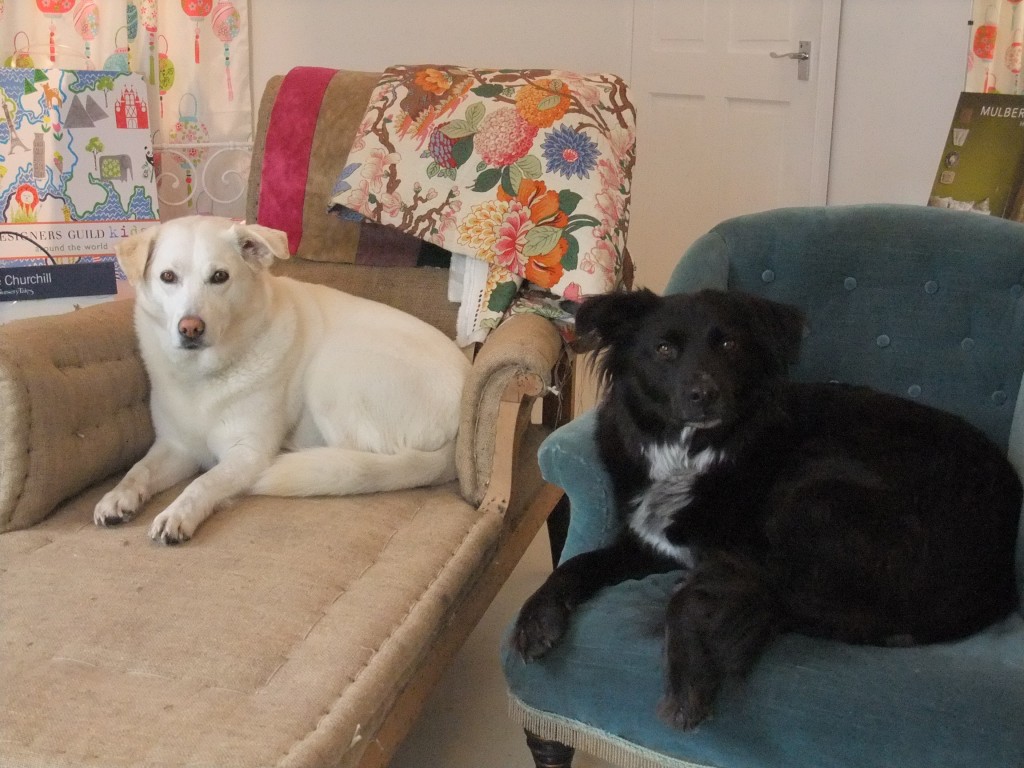 For the five years I had my shop in Knutsford, my dogs came to work with me every day. I didn’t pay them anything and they really didn’t know too much about interior design, but it was on the agreement that we would keep each other company, and that they would greet each and every customer with lots of tail wags and happy faces. In return they would get cuddles and attention throughout the day from various visitors, many of whom would just come into the shop purely to say hello to the girls! At first, we would all pile into the car for the drive to Knutsford, but once we’d moved into the flat above the shop, the girls and I spent the next four years commuting down the stairs. This was perfect because when they’d had enough of working and felt like a little siesta, they could wander up the stairs and skive to their hearts’ content on our bed. 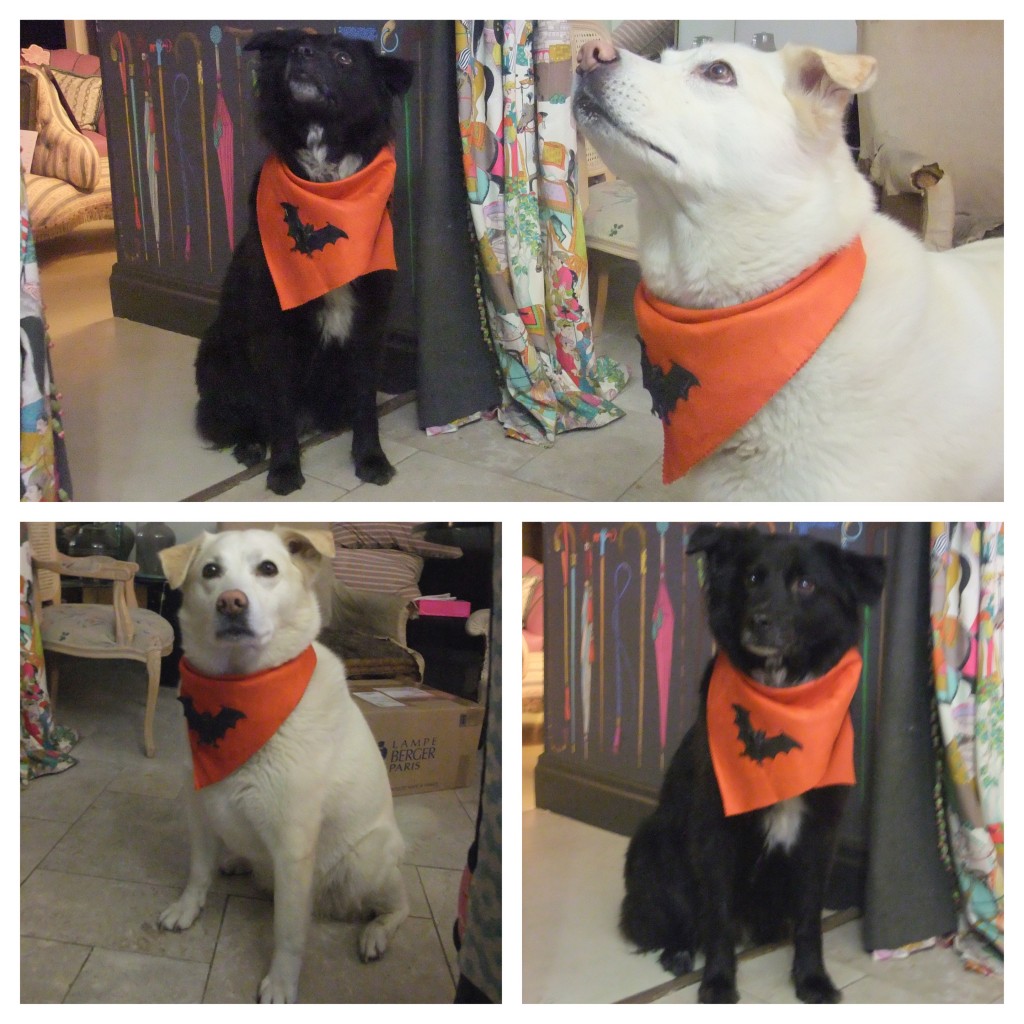 It had always been a given that they would be with me in the shop, they are my family and for me, part of the joy of working for myself is that I can choose to be with them all day. However, when I first opened up, I did have a major wobble about it all and began to doubt my decision. These doubts were based on well-meant advise from a couple of parties who wanted me to realise that I would be alienating anyone who didn’t like dogs, or were afraid of them. And I did give it some careful consideration as I really couldn’t afford to lose any custom. But in the end, apart from my own personal wish to have them with me, my desire to have a homely, welcoming, relaxed and generally ‘un-stuffy’ interior design shop won out. I rationalised that the majority of people in this country are potty about dogs, and that I’ll never, ever please everyone, no matter what I do. So I chose to stay true to myself and the vision I had for the shop. 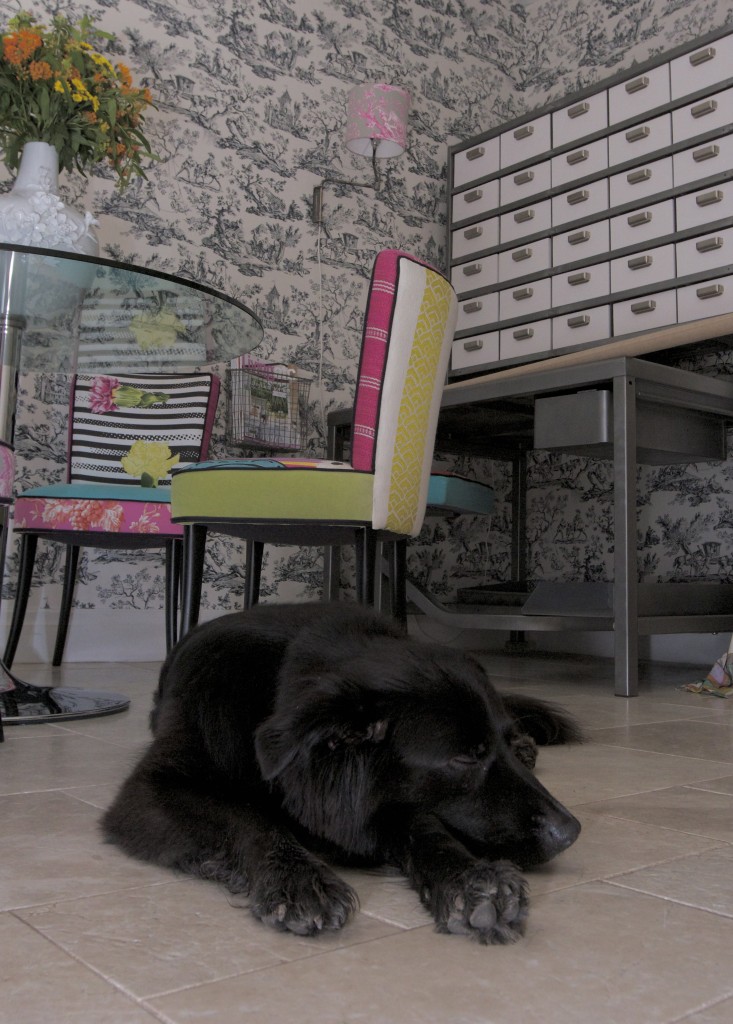 Tilly having a snooze in our work area. (Toile wallpaper in the background is by Manuel Canovas)

It was definitely the right decision, because everyone absolutely loved them. There was the odd exception where a person might pop their head tentatively through the door and tell me they weren’t very good with dogs. At which point the girls got shoved (indignantly I might add) into the stairwell to the flat, where they just sat and stared at the door that had just been closed on them, waiting to come back in and wondering to themselves who on earth couldn’t like them. And then there were a couple of people who I could just tell were quietly putting up with them out of politeness, hoping beyond hope that they’d stay lying on whatever chair they’d commandeered that day and not come near them. But the other 99% of people loved them. And quite right too, as they’re just lovely, daft dogs who want to be your friend and give you lots of lovies and have their tummy tickled. What’s not to like?

So we spent our days playing musical chairs. Well, I didn’t, I sat at my desk. And the music was just the radio playing in the background. But the girls definitely played their own version….we specialised in re-upholstering vintage and antique chairs and sofas, so the shop was full of them and this meant the girls had an absolute plethora of comfy doggie-daybeds to choose from. The only rule was that they had to sit on the ones waiting to be recovered, not the ones that had brand new gorgeous fabrics on them! It was particularly exciting for them when ‘new’ chairs arrived, either from a customer wanting it reupholstered, or from one of my antique fair expeditions; these chairs needed to be christened as soon as possible, and it was usually Tilly who fulfilled this obligation. 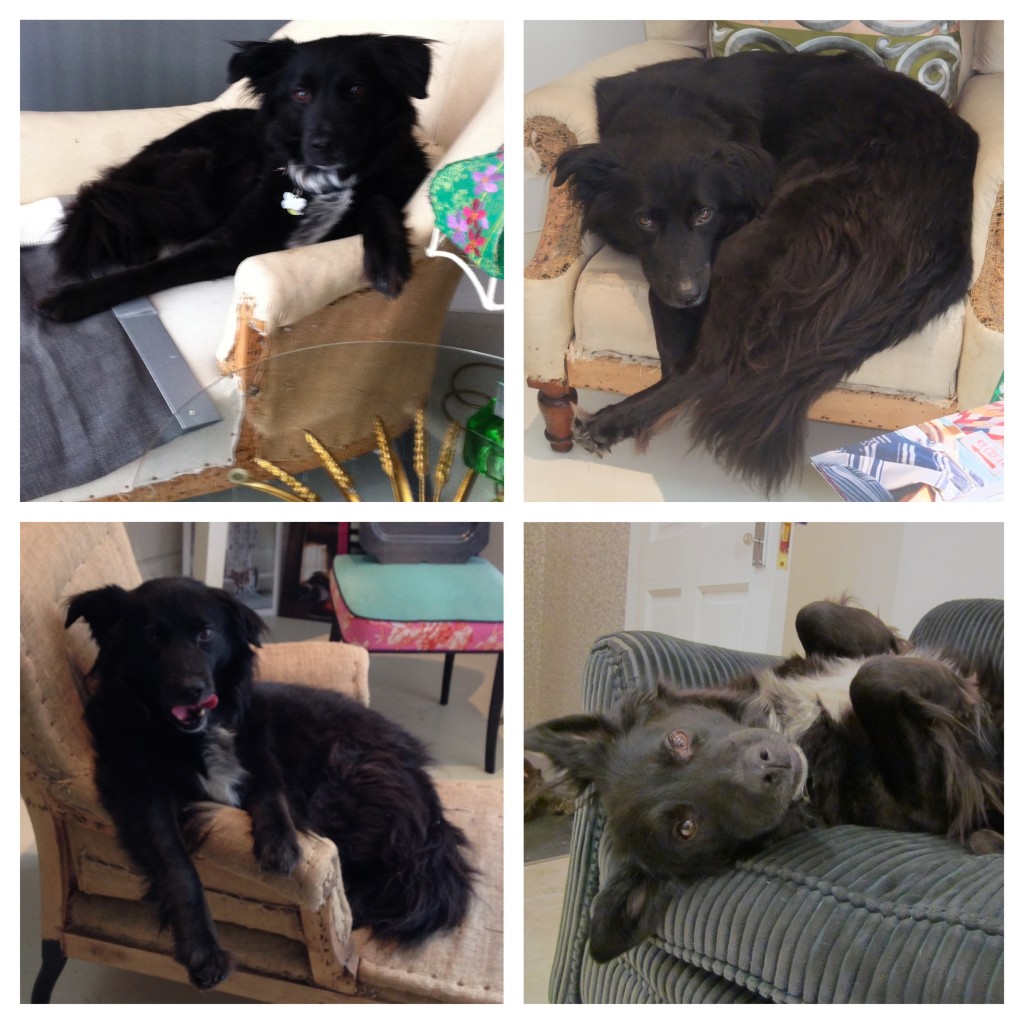 Tilly trying out all the various chairs

Mabel, on the other hand, took to lying in one of the window displays. It was a double fronted shop, and without fail, she always sat in the lefthand one as you looked out. I have no idea what in particular she liked about that window, or what was wrong with the other one, but every day, regular as clockwork, up she’d get into the lefthand window and watch the world go by. If I, the shop owner, in trying to sell my wares, should dare to put something in there that blocked her access, she would just sit and stare at it quite pointedly until I, the shop owner, realised my rudeness and moved the offending object (Mabel can be quite regal sometimes). She loved her little spot. So much so that when we closed the shop and moved to this house, she went into a bit of a decline for a few days, and I’m absolutely convinced it was because she was missing her window. 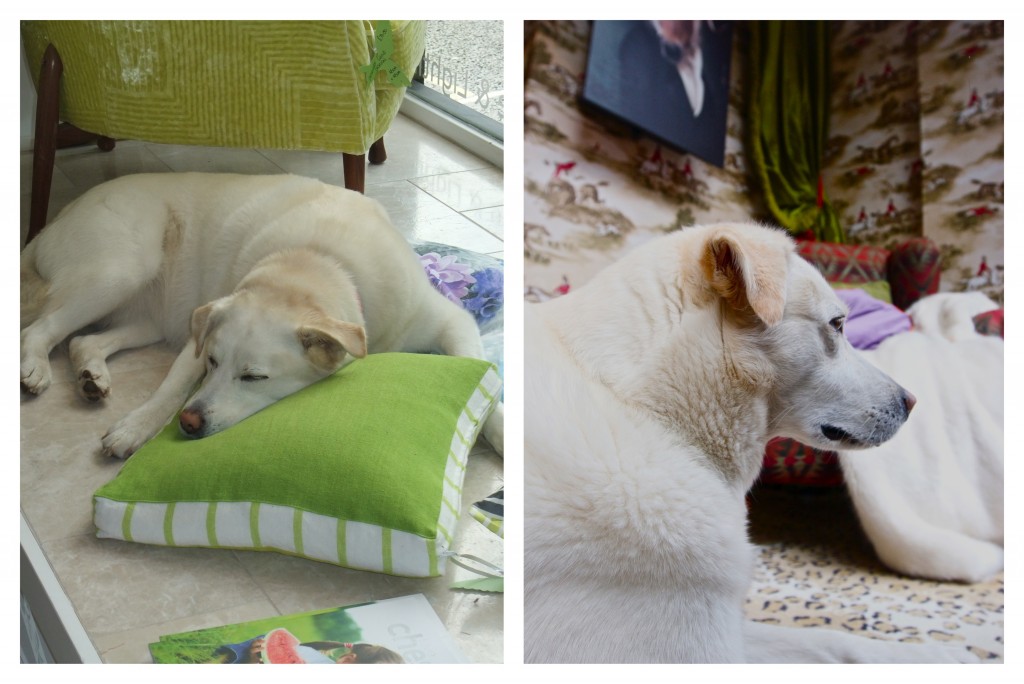 This did mean that Mabel got most of the attention; nearly everyone who went past the shop commented on her (the shop had very thin windows, we used to hear all sorts!). The majority of people did the usual “ahhh look at the dog, doesn’t she look adorable, isn’t she beautiful” type thing, but I can’t begin to tell you how many times we heard “Is it real?” or “Oh my god, it moved! I thought it was stuffed”!! This used to stump me completely. I just couldn’t get my head around why so many people thought I would put a life-sized, extremely realistic stuffed Huskador * in my interior design shop window! It still amazes me to this day and will continue to do so for the rest of my life. I’m sure of it!

* For those of you who are wondering, ‘huskador’ is my word for our lovely half-husky, half labrador girl. I really do think it should be in the dictionary as it’s a very marvellous word in my opinion.

We also got a lot of people popping in and asking us “How much is that doggie in the window?” or singing it to their children as they wandered past. This was incredibly sweet, but I did end up thinking that if each person who said it gave me a pound then…..well, I wouldn’t have been rich, but I’d definitely have had a nice little holiday out of it, that’s for sure. 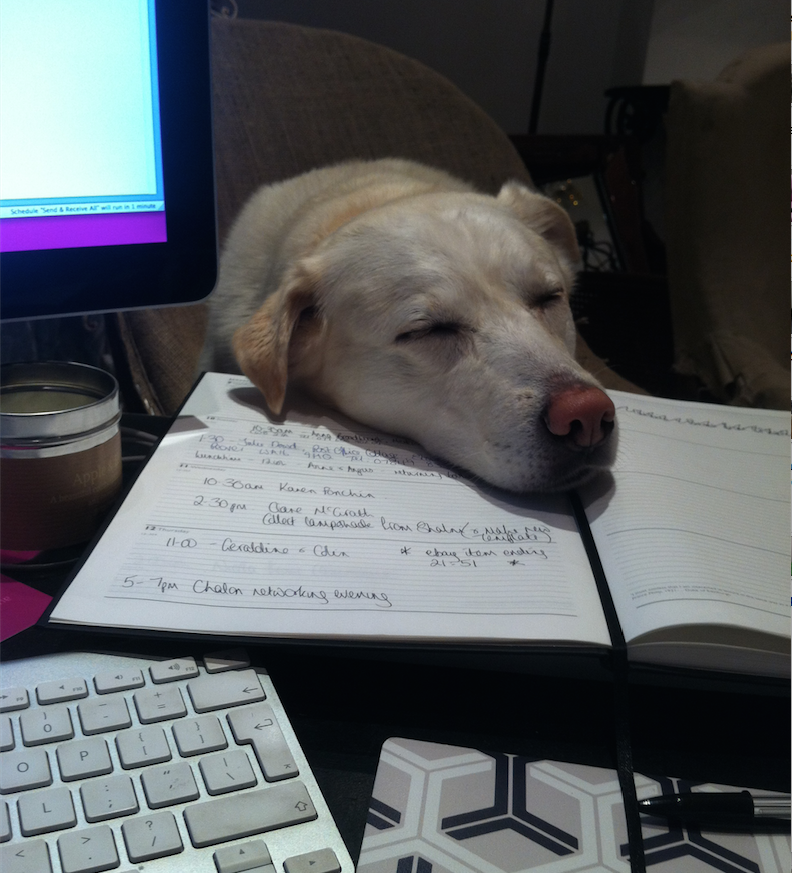 I love this photo of Mabel falling asleep on a chair but resting her head on my desk. It is still my screensaver on my phone, even though this was taken years ago. You can also see that I was very worried about an eBay item whose auction was finishing that week!

In the last year or so of the shop, the girls were joined by a new shop assistant, this one being of the feline variety. My husband and I have always had cats in our lives, but sadly we lost Molly just before we moved to Knutsford, and Harry only had three more happy years at the flat before he sadly went too. Harry had never really got on with the dogs, he saw them as interlopers and avoided them at all costs, so he never ventured down to the shop, preferring to sleep in the flat or mooch about outside. But one summer we went on holiday, the dogs went to a B&B, and Harry had free rein of the shop for the whole two weeks. My wonderful colleague Lu told me he’d been brilliant company and that he’d also liked to try out all the different chairs and sofas, and help her with her wallpaper choices. 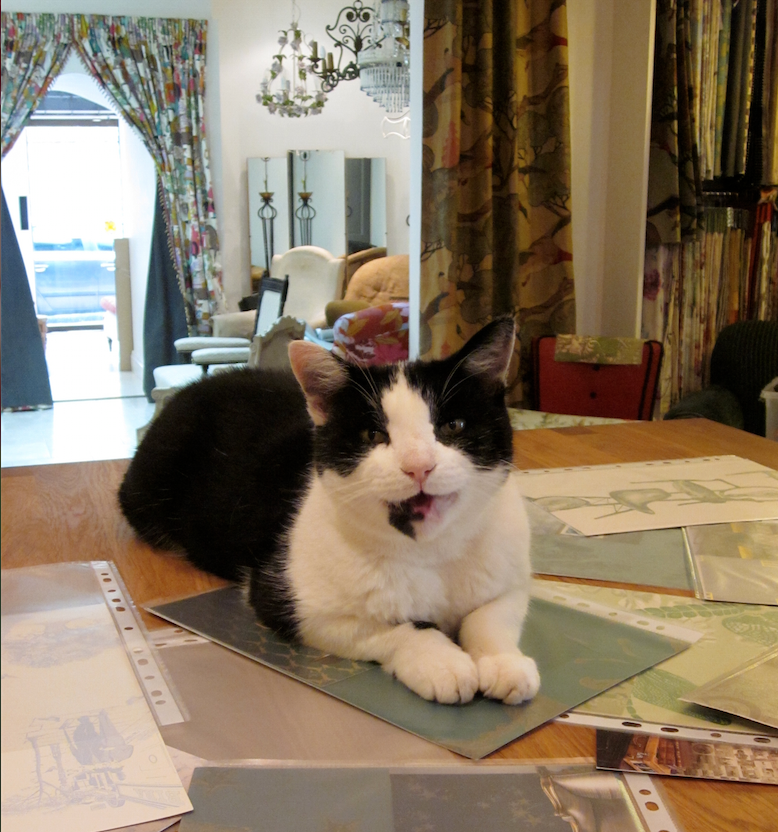 “Lu, I think we should go for this wallpaper”
(Mulberry’s flying ducks curtain in the background) 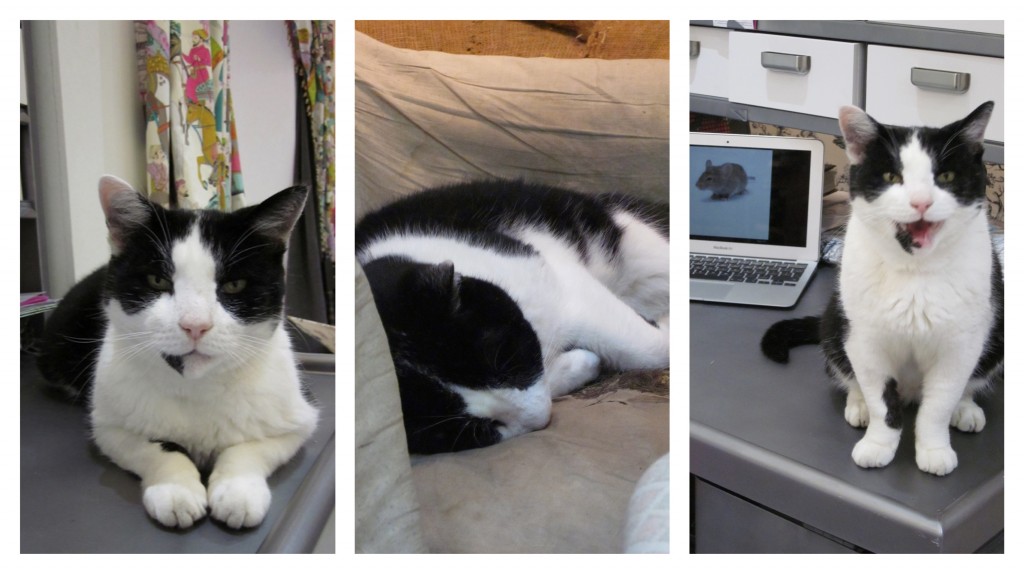 1. Harry courting Lu with his dashing good looks
2. Working for a living is extremely tiring
3. “Lu, I want one I can eat!” 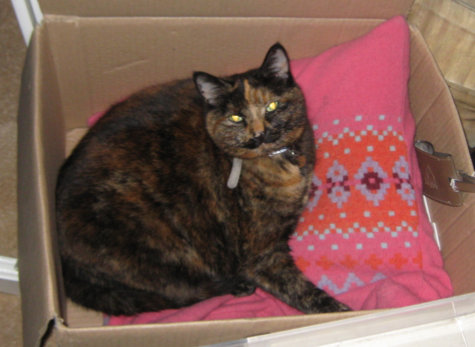 Even though she never came to the shop, Molly (also sometimes referred to as Hitler due to her moustache) has to be featured! She’s part of the family x

The new shop assistant joining the girls was called Dotty. We rescued her as a tiny kitten and from very early on, she decided that the dogs were much more appealing than the pair of humans she’d been lumped with. She whirls and twirls around them, and head-butts them and curls up next to them, and generally loves them. So she was more than happy to spend her days with them in the shop. Now…Dotty is called Dotty for a reason. It wasn’t that I had a special fondness for the name Dorothy and shortened it to Dotty like I do with hedgie and blackie. No, this name means something. This cat is the craziest cat I have ever known. Ever! So she was quite an interesting little addition to the working environment, and kept Lu and I most amused with her escapades. 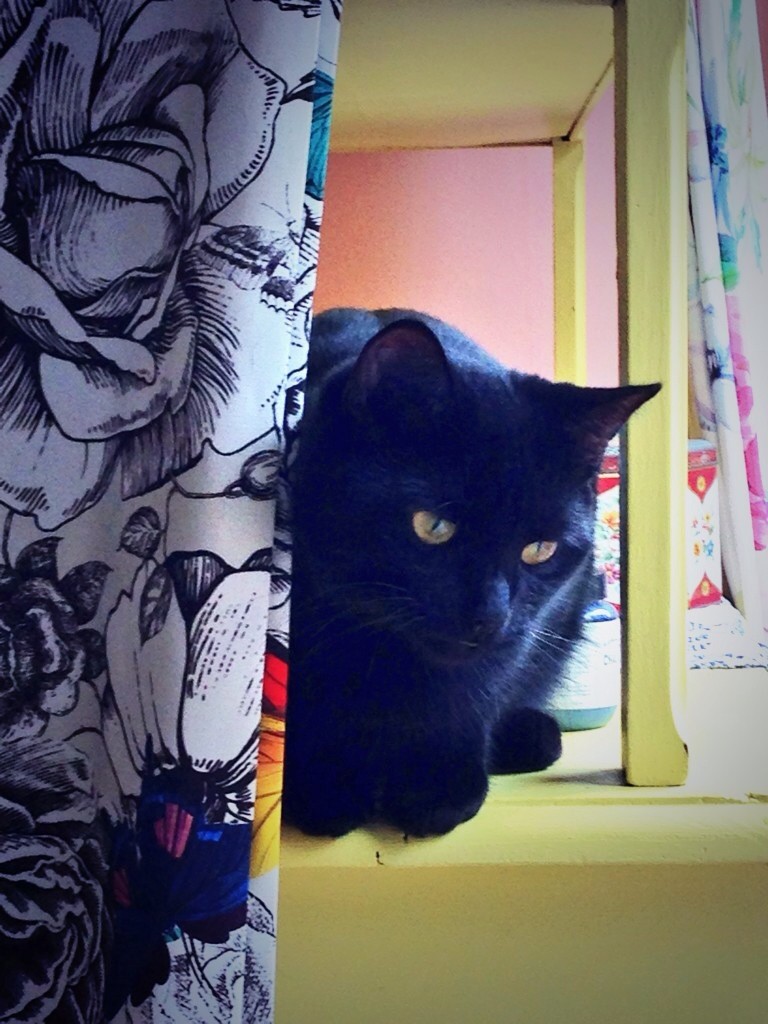 Such a beautiful cat. But so derailed mentally! 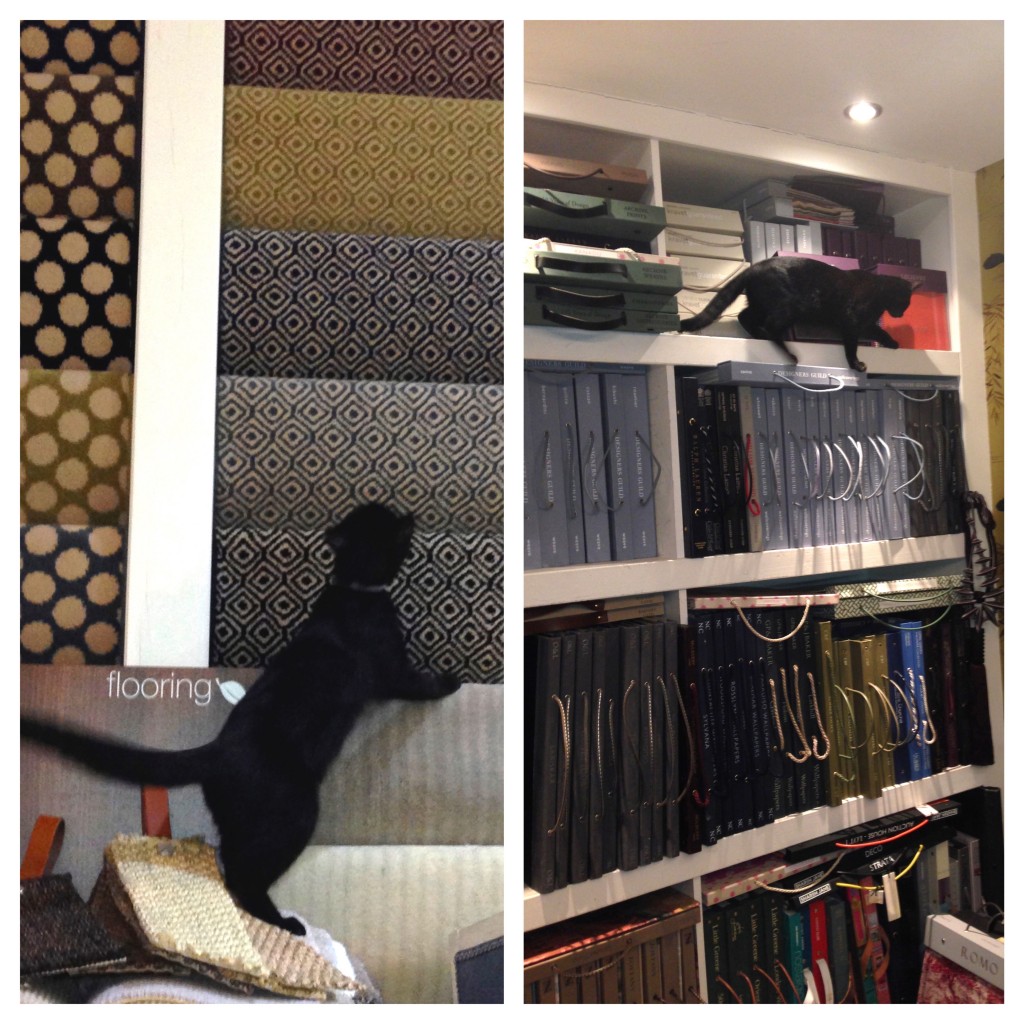 Up to mischief around the shop 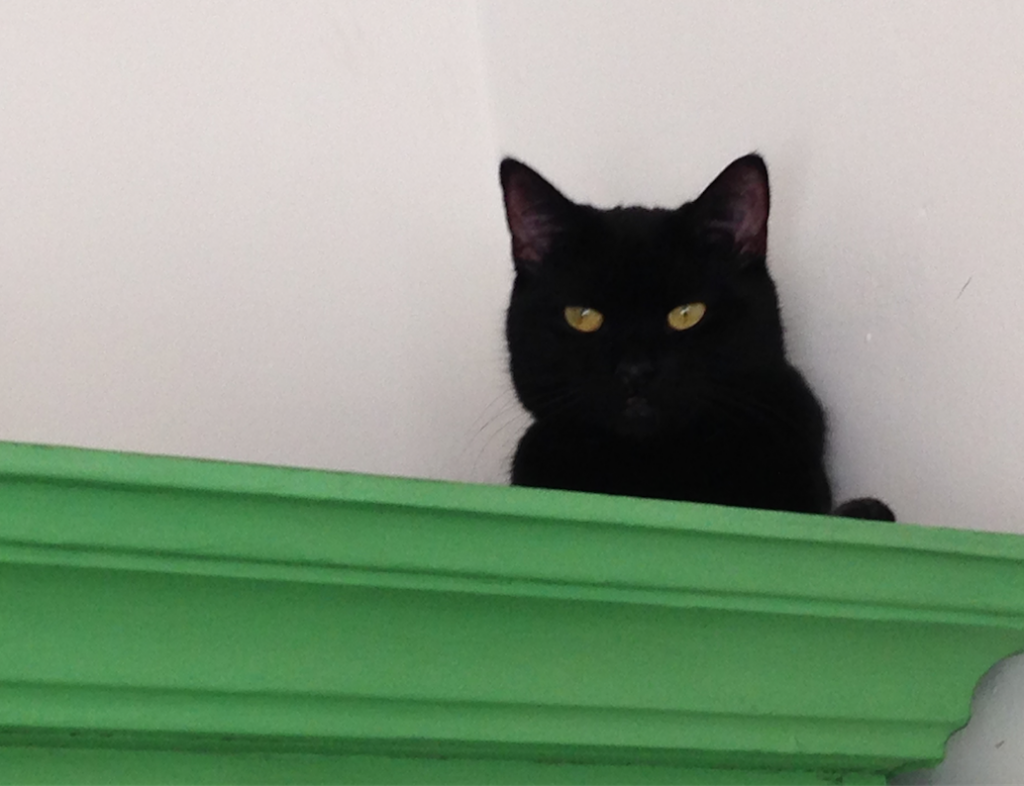 Planning her attack on poor unsuspecting customers below, who were innocently browsing the products on the dresser 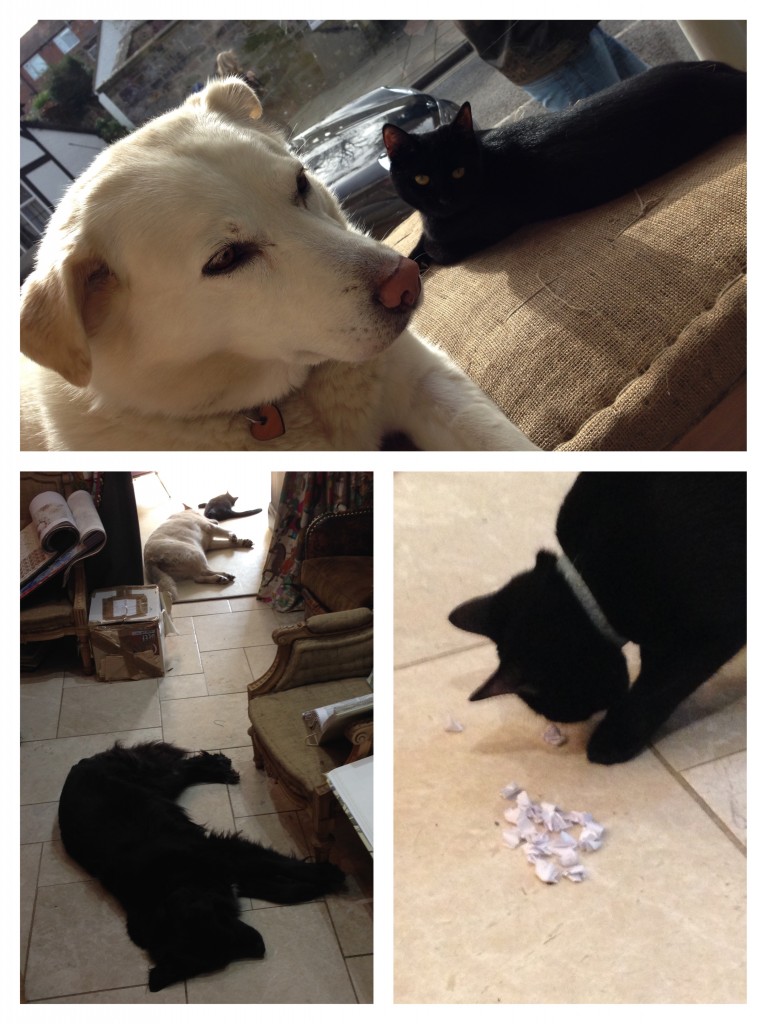 1. Mabel most displeased that Dotty’s sharing her window
2. A row of three sleeping animals
3. Dotty choosing a winner for one of my competitions

So, it was an interesting little shop to visit, I think. I did spend a lot of my time telling people that we were indeed an interior design shop, not a pet shop, but I do think they enjoyed the experience nevertheless. Of course, I like to believe that my customers appreciated their surroundings, the beautiful products on show, the items they could buy, but I also believe that we offered them something a little bit extra. We weren’t just about decor, but about home and family, and I hope everyone who visited us went away feeling a tiny bit happier than when they walked in. I know the girls always did! x