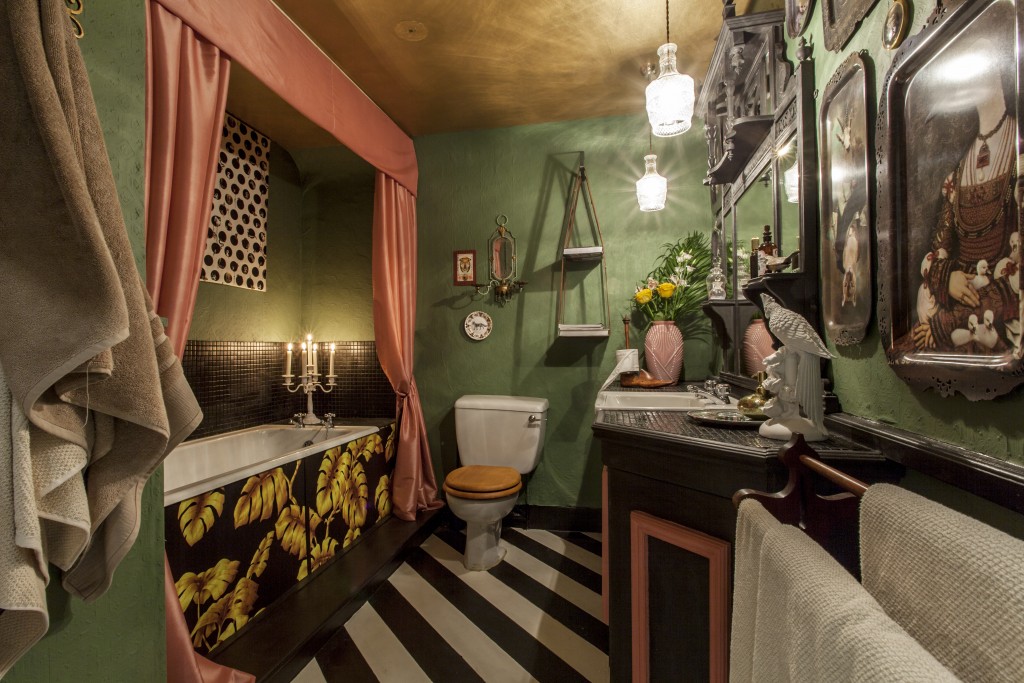 This post would’ve been titled ‘My Budget Bathroom’ if it wasn’t for my husband. He introduced the ‘bonkers’ bit by coming out of our bathroom on a regular basis shaking his head, laughing slightly hysterically and muttering to himself, “It’s bonkers, absolutely bonkers”. Of course, I didn’t have a clue what he was talking about. Was he looking at the same bathroom as I was? Did he need a new pair of glasses? To be honest, I was a little bit worried for him, because to me it looked perfectly normal and lovely. Wouldn’t everyone love a bathroom like this? 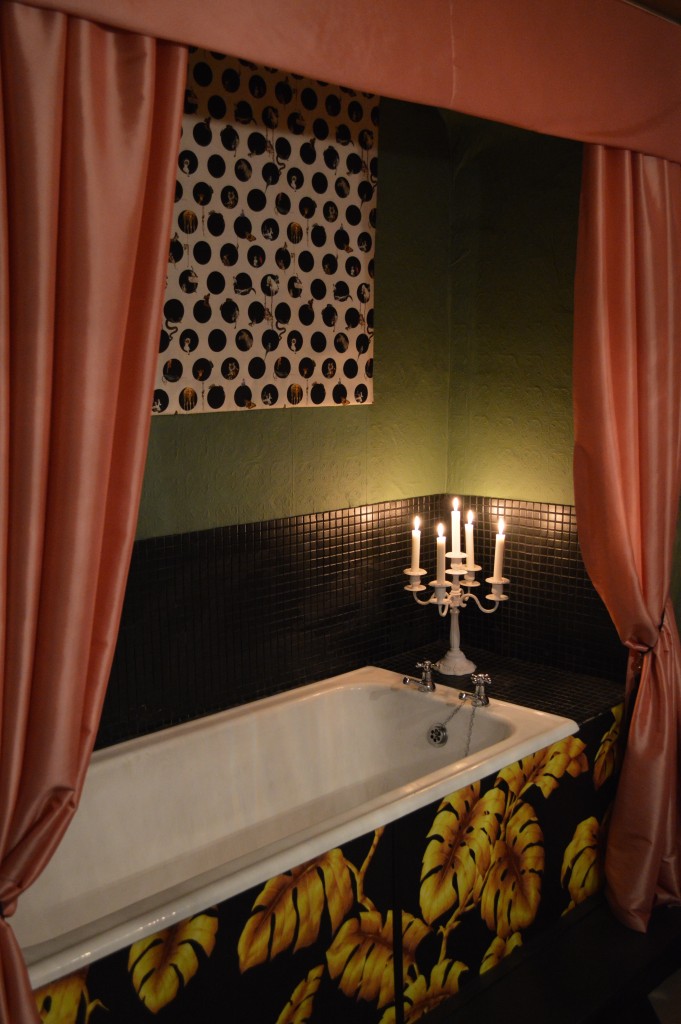 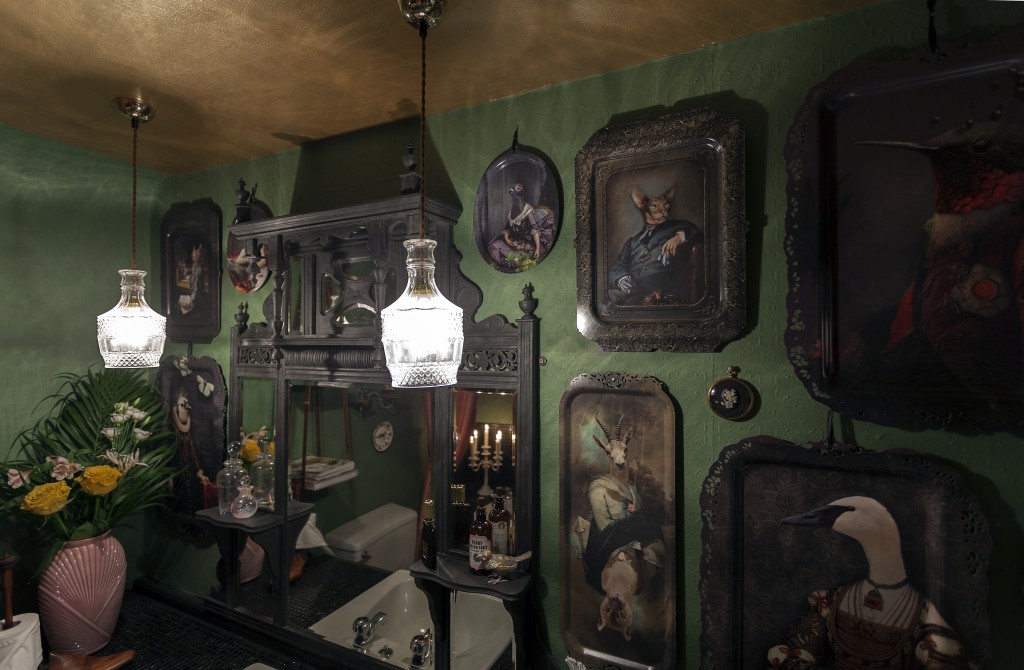 My gallery of suited and booted animals

Well, perhaps not, but I certainly did! I adored my long, hot soaks in the bath, relaxing by candlelight, snuggled up behind my pink curtains, glass of wine at hand, gazing at my gallery of well-dressed animals, and for some reason, day-dreaming about dark, misty nights on the cobbled streets of Victorian London. I’ve got extremely wrinkly hands at the best of times, but my new-found reluctance to get out of the bath meant they started to resemble shrivelled-up prunes in no time. The sad thing is, when we finally finished decorating this dream bathroom of mine, I literally had two weeks to enjoy it before we moved here! 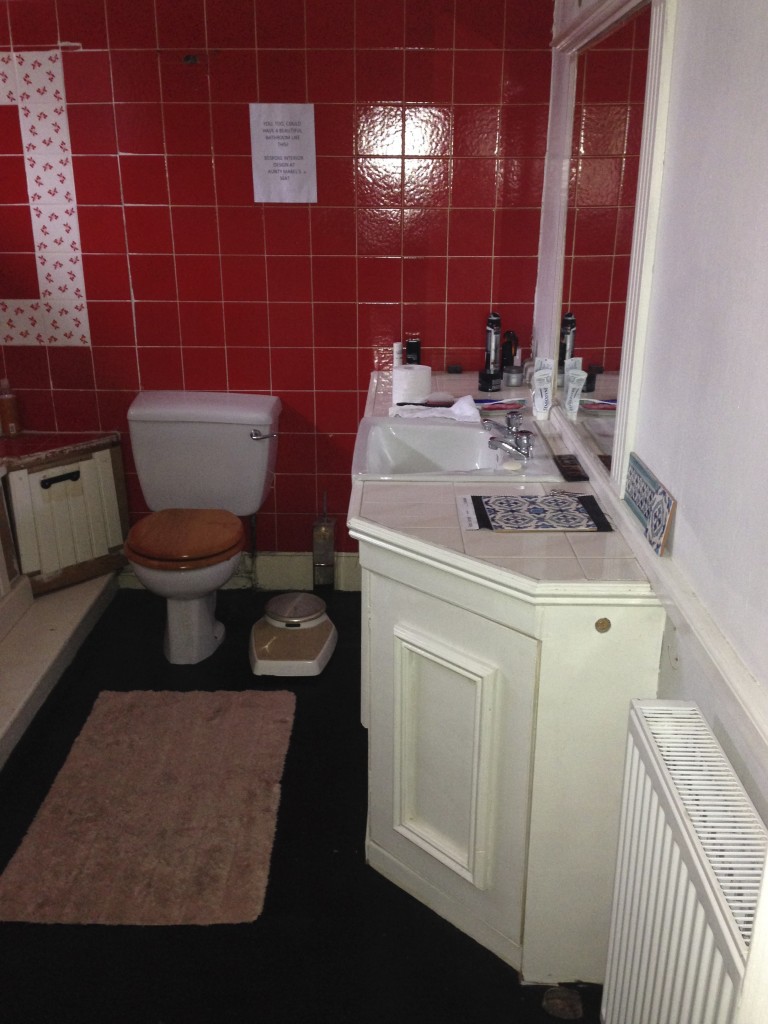 Here’s the bathroom before we started work on it – isn’t it marvellous?! 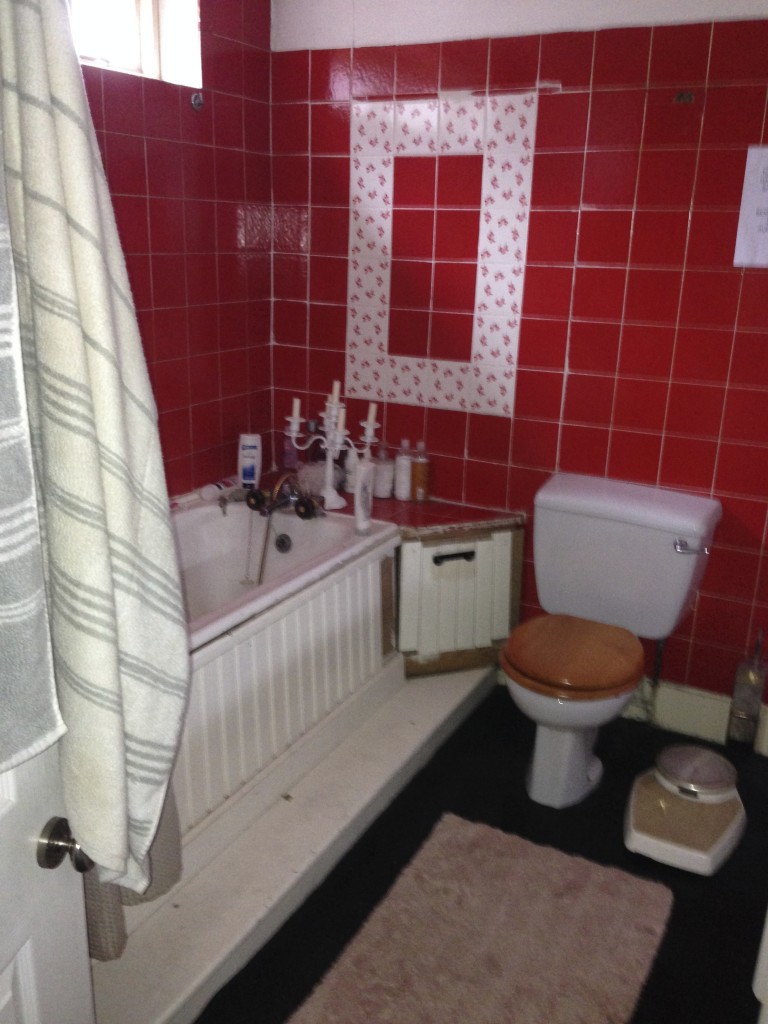 Another fetching image of the ‘before’ bathroom

Now, I’d completely forgive you if you were thinking to yourselves that that was actually the bonkers bit about the bathroom, but there was method behind the madness, I promise you. You see (your honour), my husband and I were living in the flat above my shop, and early last year before the decision not to renew the shop lease was made, I broke under the pressure of the red tiles. I’m surprised I had lasted four years to be honest, but one day it all became a bit too much, and they just had to come off the walls before I went crazy. This meant that as we approached the end of the year and our moving date got nearer and nearer, we had a bathroom that was in no fit state to be handed back to our landlord. 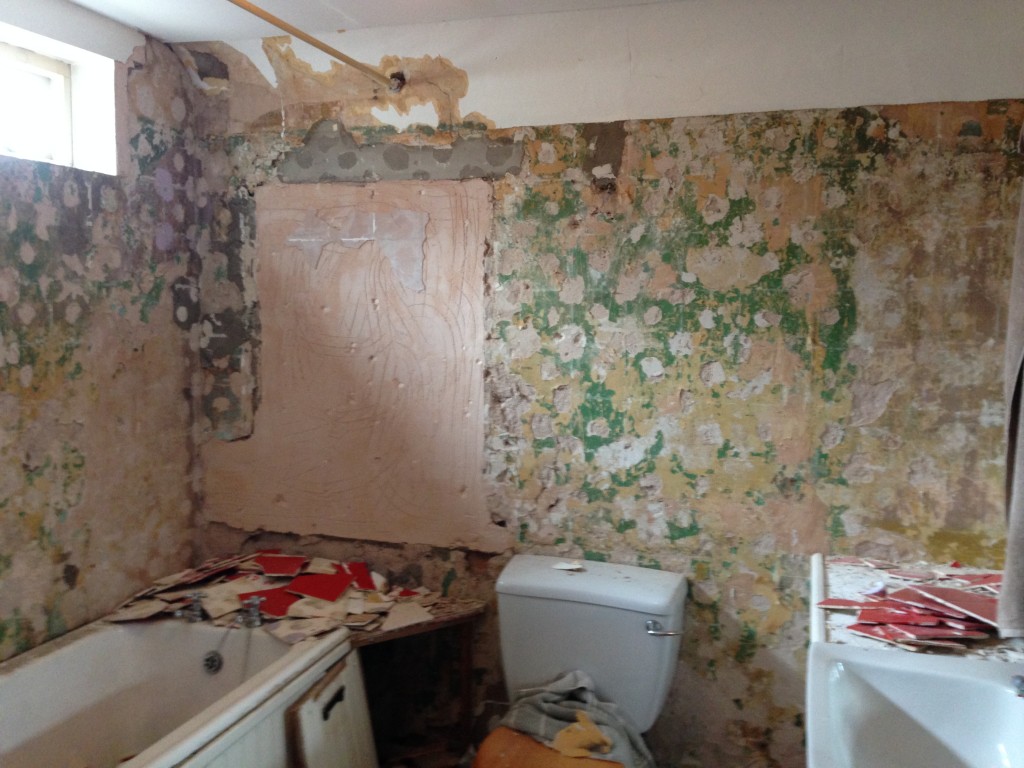 Oh, the joy of taking those ghastly red tiles off!

So, I had an extremely ‘legitimate’ reason for decorating. The fact that I’d had the design for this bathroom in my head for so long that I’d be heart-broken not to carry it out, well, this didn’t come into play at all. And the fact that I wouldn’t have a complete portfolio of the apartment for my interior design business without having pictures of a bathroom, well, I can assure you that that didn’t even cross my mind. It was all for the landlord gov’nor, honest. 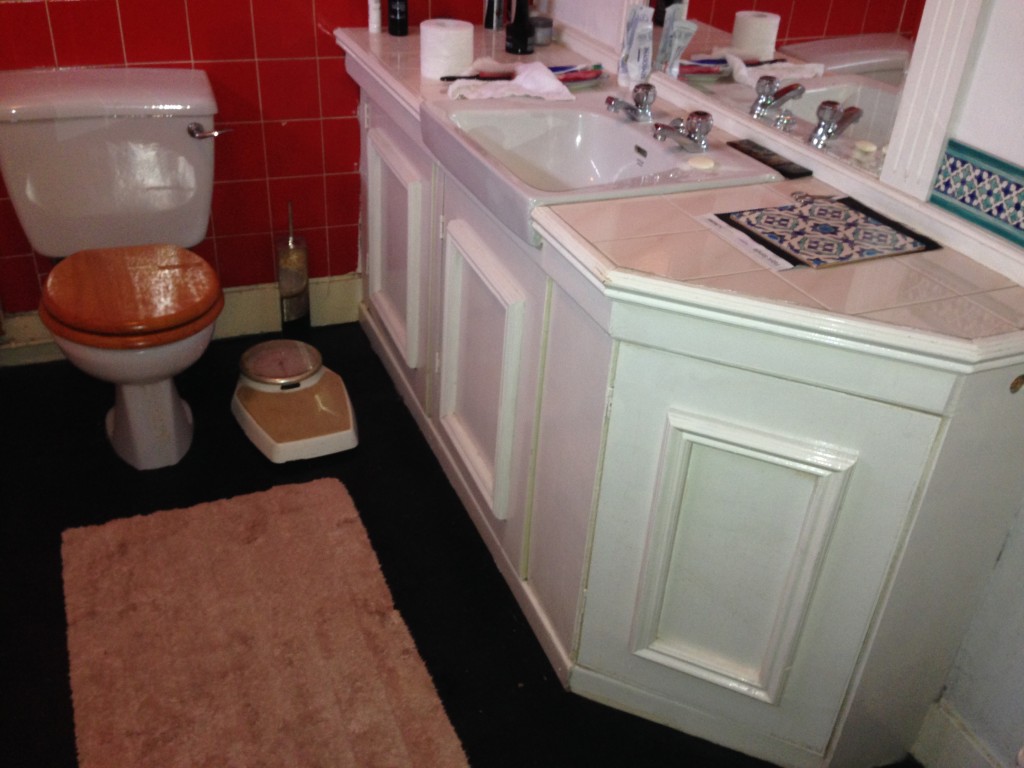 What this did mean, however, was that unlike the rest of the apartment, the bathroom had to be done on a very tight budget. The other rooms weren’t extravagantly costly, we haven’t got the money for that, but they did have a much loved antique here, a designer wallpaper there, curtains and upholstery that we had to save up for. In the bathroom, it would be about making the best of what was already there and creating a stylish room I could love, whilst minimising our investment in someone else’s property. I really enjoy working on projects with limited budgets, as you are forced to be even more creative and inventive. And if you can create the look you want without spending too much money, then that leaves more pennies for other important things. Like shoes. 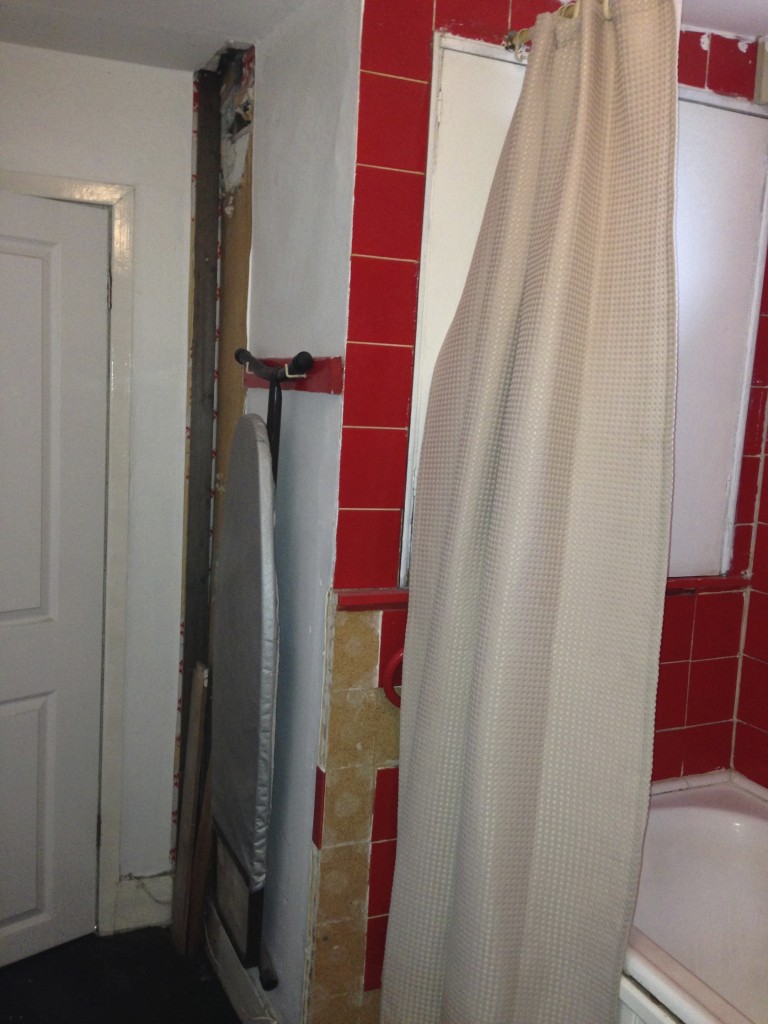 Another ‘before’ photo – for four years we didn’t even remove the landlord’s horrible ironing board! How lazy were we?

The entire scheme for this room started in a pub in Brighton. Greg (that’s the husband) and I were exploring the Lanes when an extreme thirst took us over and we hopped into the next local for a bit of quenching action (this happens a bit too often with us two). I love old Victorian pubs and this one in particular was a bit quirky and a bit shabby, just how I like them. While we sat there and did a bit of people watching, and admired the oh-so-trendy gentleman at the bar sporting plus-four trousers and a curly moustache, I was also eyeing up the turquoise and black panelling down the side of the bar, thinking to myself that this would be the perfect way to treat the existing cupboards in the bathroom back home. And there we had it, the bathroom’s brief started bubbling away. A pubby style Victorian gothic salon type thing. Not so easy to explain with words, but something that sat happily in my mind and made me excited. 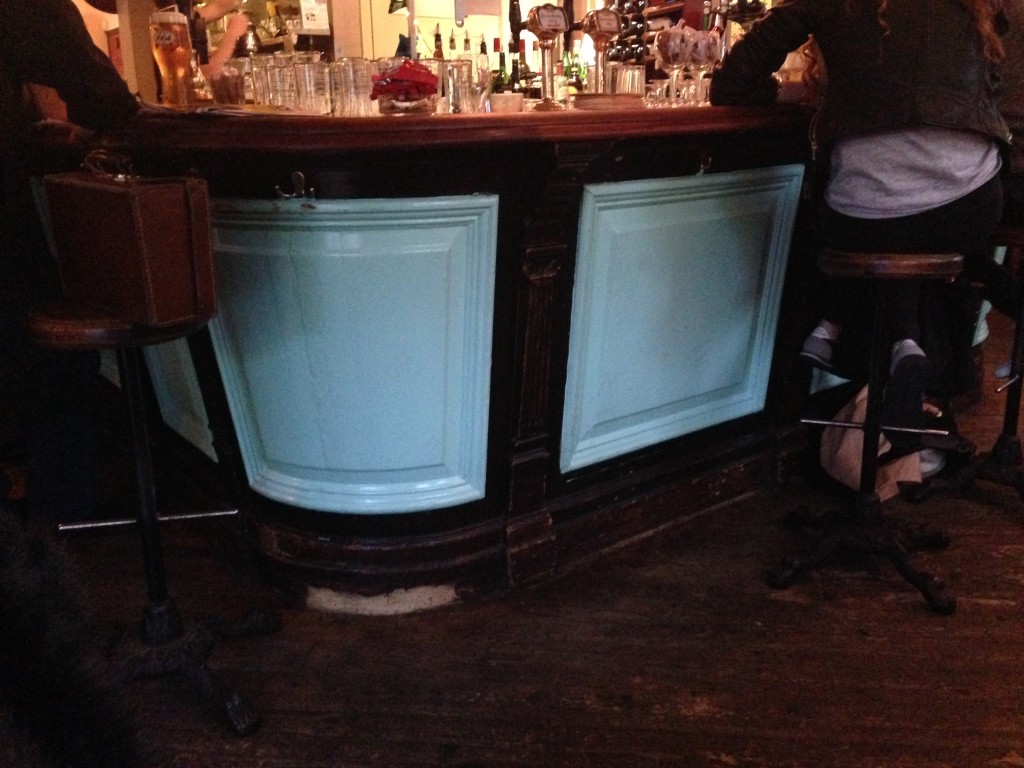 The Brighton pub bar that inspired me

To help me I created a moodboard on Pinterest. For anyone not familiar with Pinterest, it’s an online pinboard where you can ‘pin’ any image off the internet onto as many virtual boards as you like. It is an extremely useful tool for collecting all your ideas together and for me, it is a gold mine of inspirational images which really help me with my design work. But be warned, once you’re on, you will become addicted so don’t blame me when you realise you’ve just spent your entire Sunday morning ‘pinning’ turquoise rooms onto your ‘Turquoise’ board and you’ve not done a scrap of anything else. If you do have a butchers at my moodboard, you’ll most likely spot quite a lot of Victorian paintings of women which never actually featured in my finished room. This was because I was going to decoupage a selection of these onto the doors of the cupboards, inside the beading, but in the end I decided this was going to look far too busy and for once, restrained myself. The rest of it should make sense hopefully. 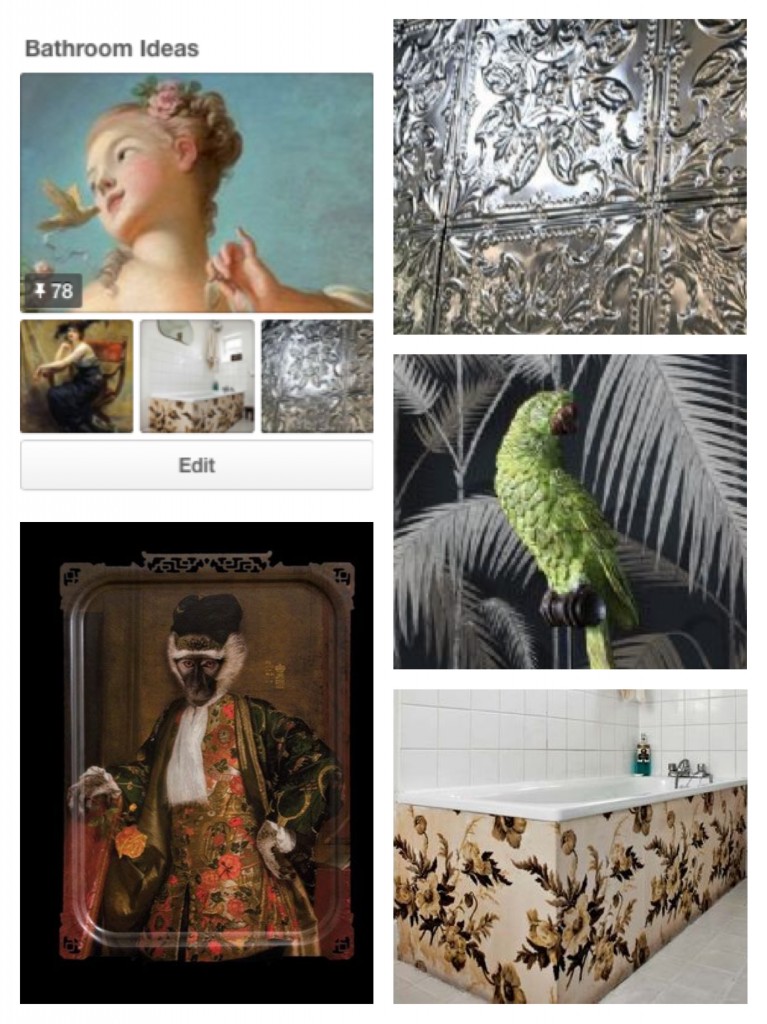 In an ideal world, I would have changed the basin, loo and bath. But I was in budget world, and in truth there was absolutely nothing wrong with the basin and loo. The bath was an extremely good quality steel one, but it’s enamel had worn away so we were constantly getting our bums scratched. Good for exfoliation maybe, but not at all good for a comfortable soak. And my other bug-bear was that it’s taps were situated at the end, so if Greg and I wanted to share a bath with a nice G&T, there would be the age-old discussion on who got the tap end. Ideally, I wanted to get a double-ended bath, with central taps (in gold!), and also reposition the bath into the centre of the wall so each end would have a shelf (for the G&T). But again, I was on a budget, so we kept our scratchy bath, and kept it’s position. I think if we’d been staying a tad longer, I might have just splashed out on a bit of re-enamelling for the sake of our bottoms! 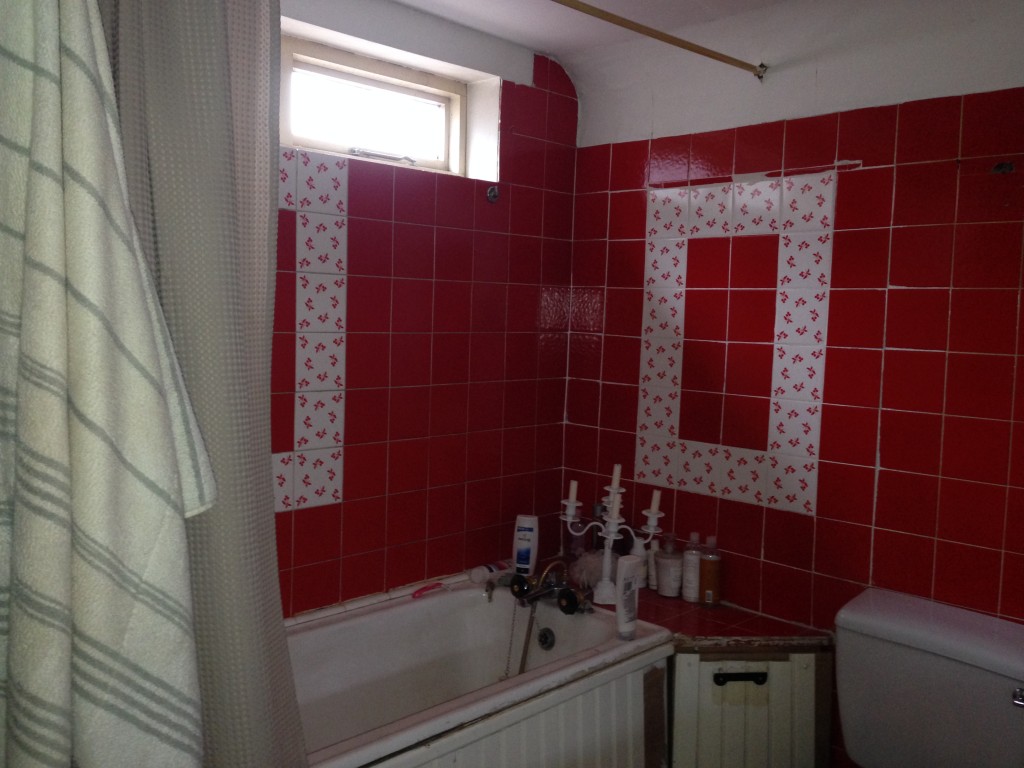 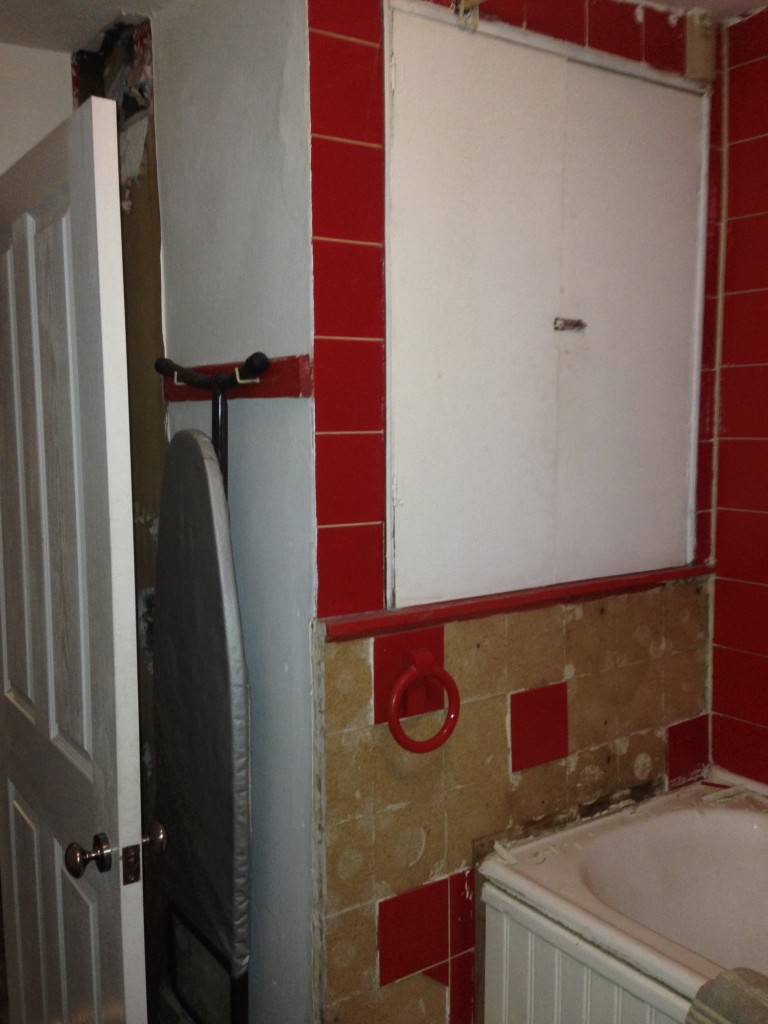 Ideally the old cupboards housing the basin would also have gone. For me the unit was just too old-fashioned, and not in a good way. But following the inspiration I took from the Brighton pub, I decided that with a bit of imagination I could make the cupboards work for me. This meant replacing the horrible white tiles inset on top, putting a much nicer mirror above and simply changing the colour of the wood. I painted using Annie Sloan’s Chalk Paint, choosing Graphite for the main body and Provence for the beading. Annie’s paint was the obvious choice as 1. I was her stockist, 2. it’s fabulous paint and 3. you don’t need to do any sanding or priming which appeals to a DIY-averse person like myself. But we all make mistakes, professionals being no exception, and once I’d chosen the wall colour and got it up on the walls, the Provence looked awful (I should’ve taken a photo to show you). So I repainted the beading in Scandinavian Pink. I was much happier, and luckily it wasn’t an expensive mistake, just the cost of a sample pot of paint. 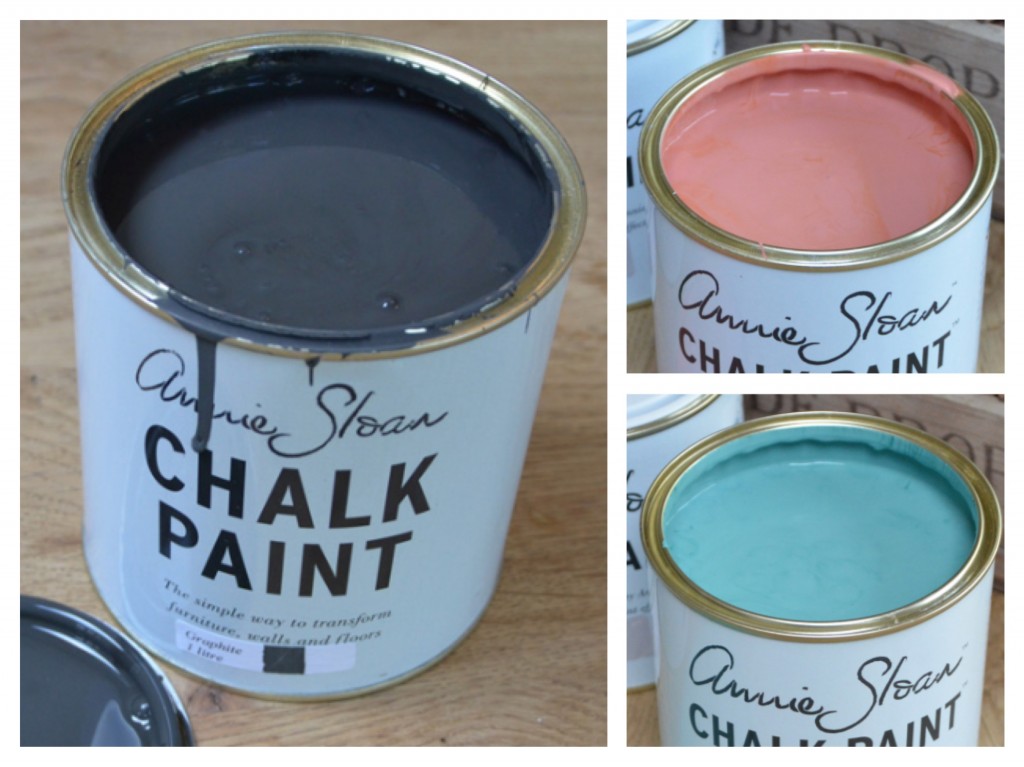 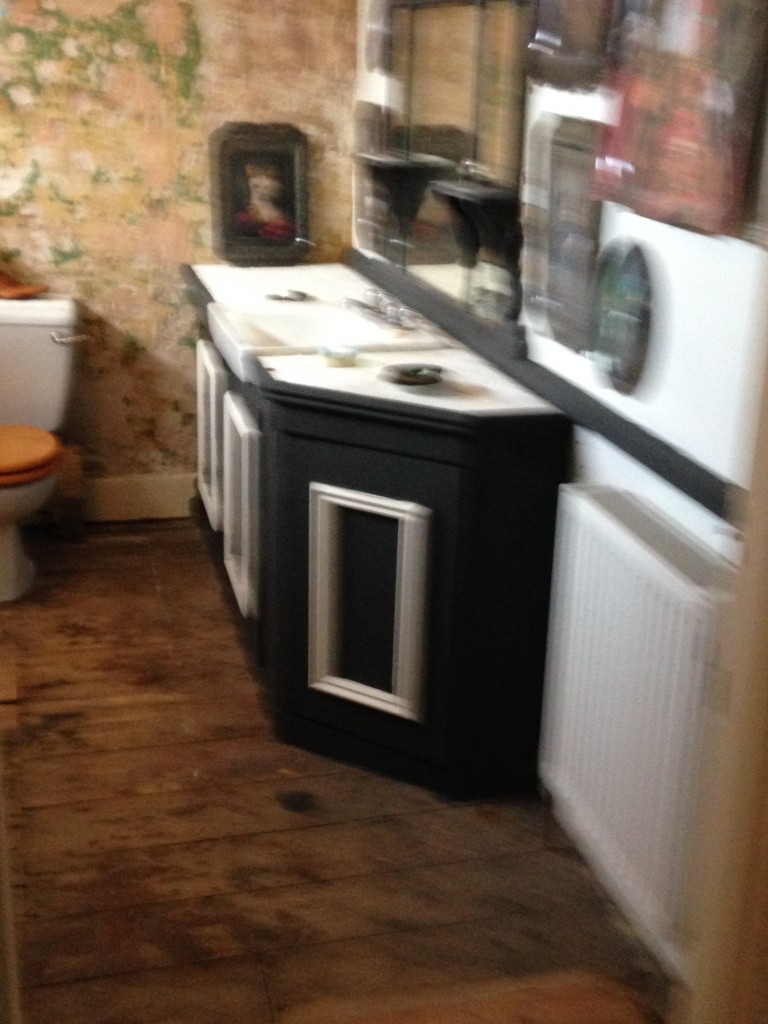 Cupboards mid-way through painting them

The mirror was sourced off eBay and cost £130. I loved how gothic it looked once I’d painted it with the Graphite, and was chuffed that the transformation had only cost me the price of the mirror, and £18.95 for a pot of paint. And the stunning little mosaics that I used on top around the basin were ‘Chromatic Harlequin’ from Topps Tiles. These were quite expensive at £220.26 per square metre, but I only needed about half a metre, so I decided that £110 was an acceptable amount to spend on such a special little feature. The alternative would have been to use the same less expensive tiles that I put around the bath, which would have still given me the look I was trying to create. But I was far too in love with the petrol colours of the harlequin ones to change my mind. 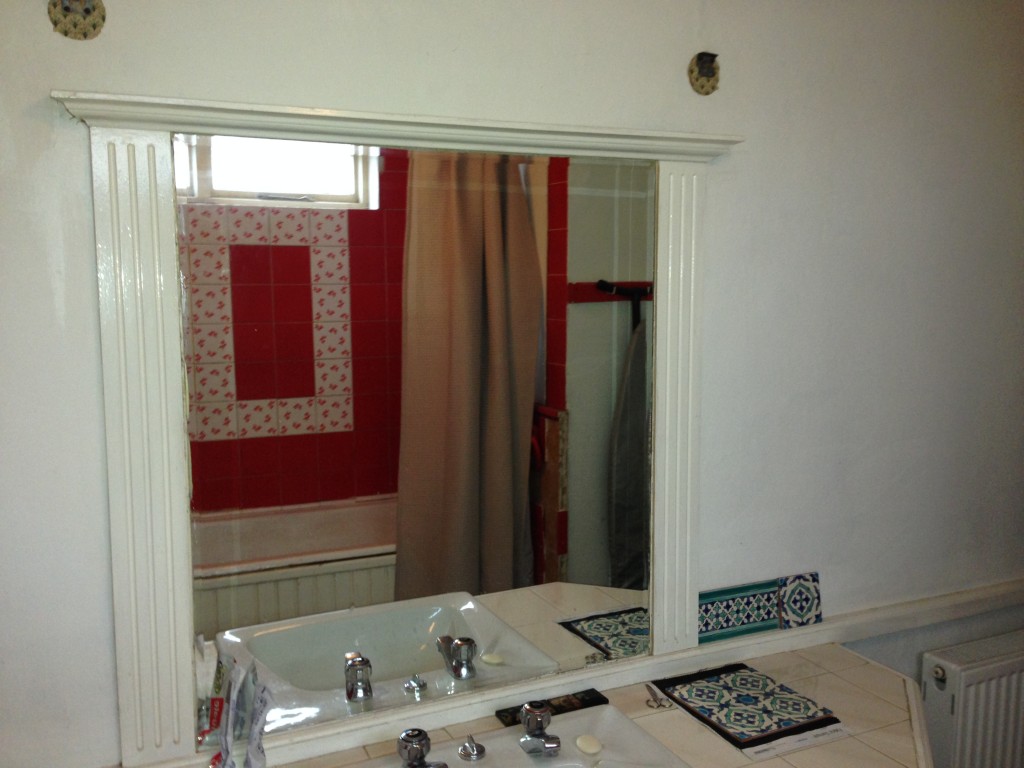 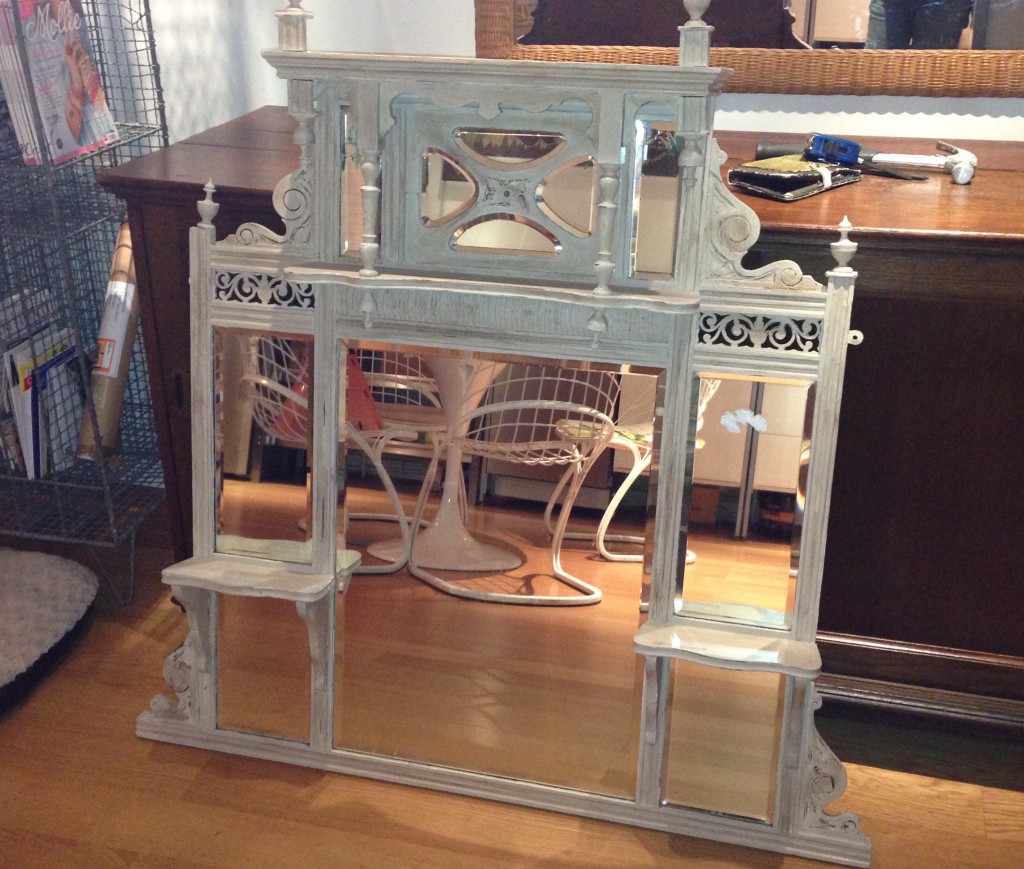 The replacement mirror before I painted it 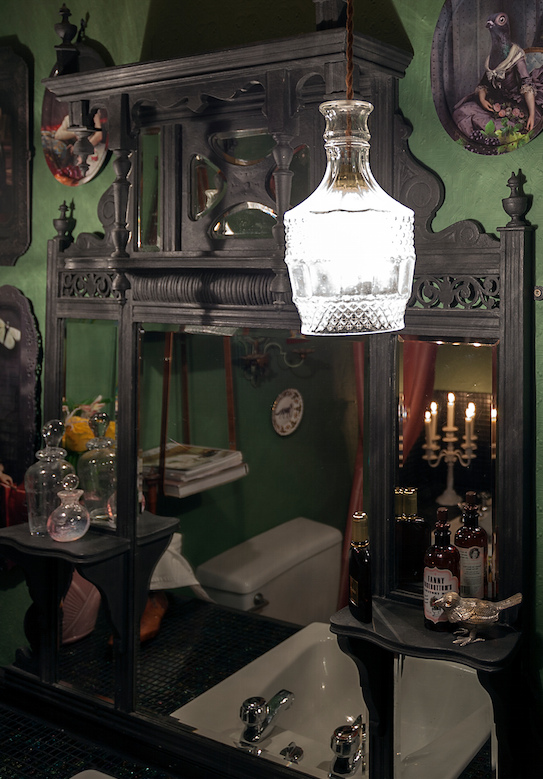 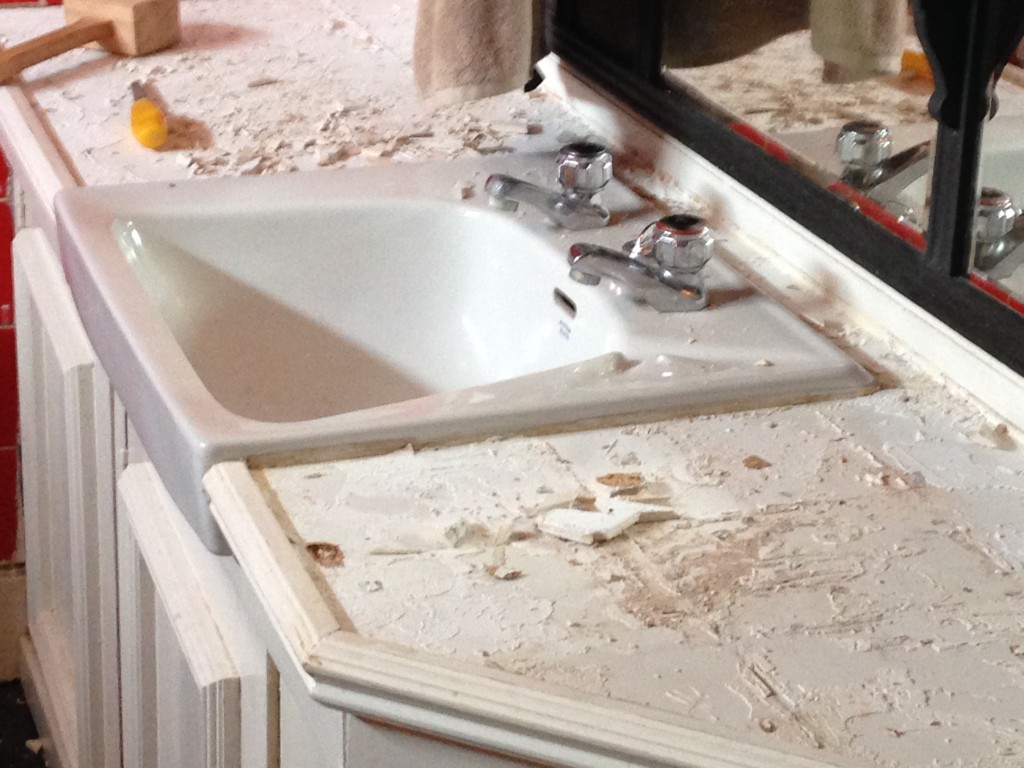 Removing the white tiles on top of the cupboard unit, making room for my lovely mosaics 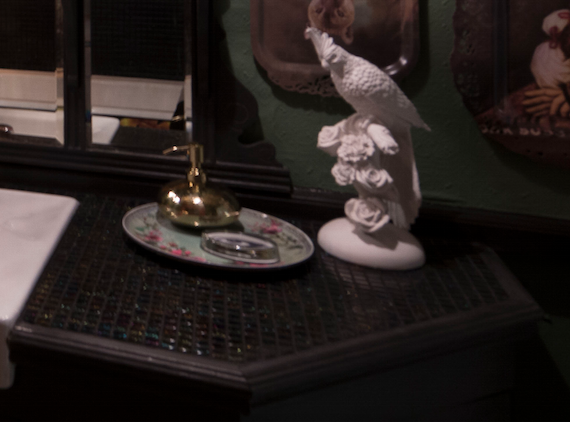 The new mosaics in situ 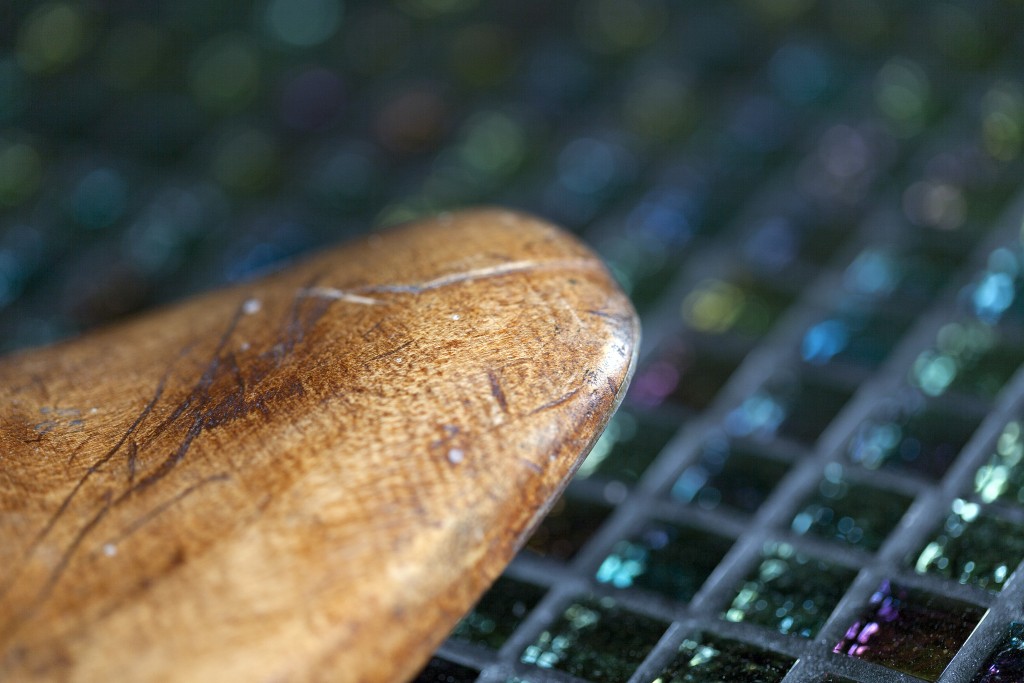 I have so much more to tell you about this room, but I feel like I’ve been prattling on for ages now, and I must go and do some proper work rather than having fun chatting to you guys! So if you’re enjoying reading about my budget bathroom and would like to know more about it, check back with me later in the week for the next instalment.