THE AMARA BLOG AWARDS, MY NOMINATION (EEK!), HOLIDAYS ON THE AMALFI COAST AND THEIR LUXURY ONLINE MAGAZINE… 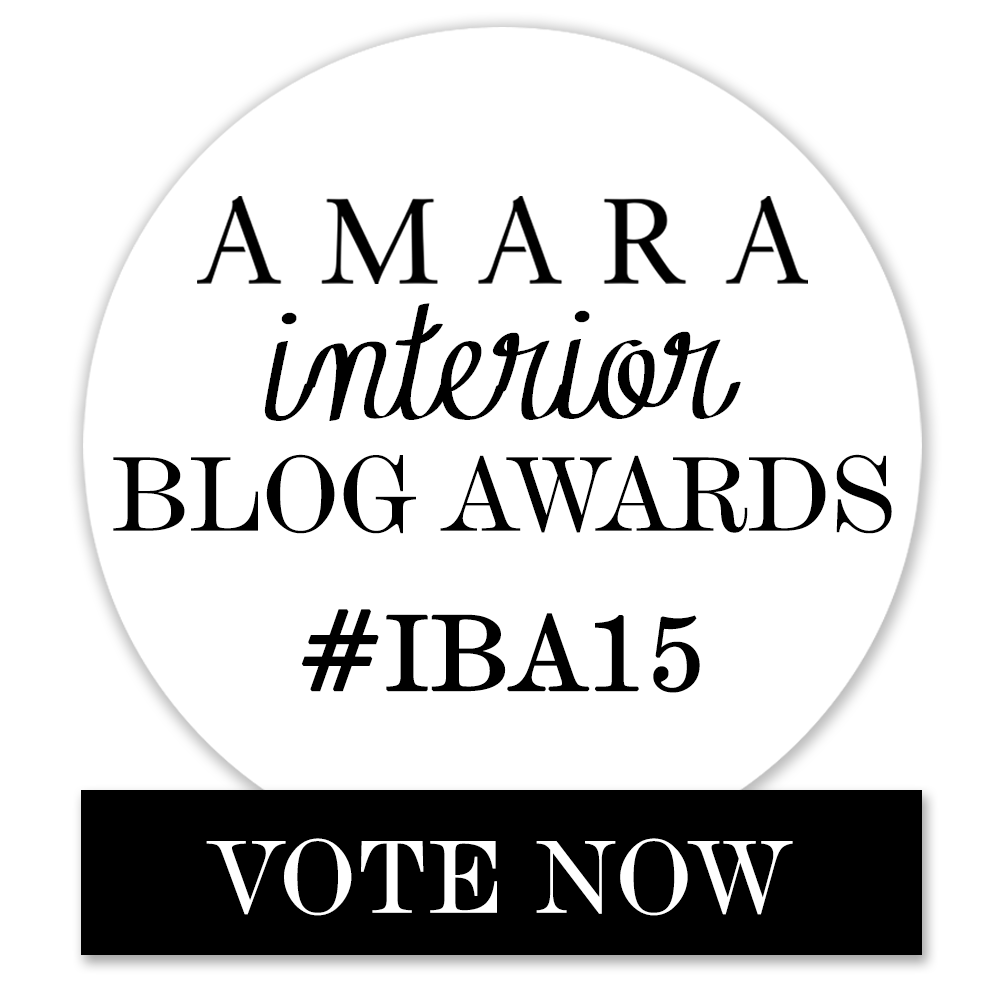 I’m so excited to announce that I’ve been nominated for the Amara Interior Blog Awards 2015 #IBA15, as Best Newcomer, and I still can’t quite believe that my new little blog has received an actual real-life, genuine nomination to these amazing awards (no husbands or mothers were involved, I promise!). But I now need your help, because to be short-listed to the final top five, I need votes, and lots of them, so if you like my blog and have enjoyed what I’ve shared so far, I ask you, I beg you, I shamelessly plead with you to PLEASE PLEASE vote for me. It literally takes up 60 seconds of your day, and it would mean such a lot to me if you were able to take the time out to do this. What’s more, if you vote, you are automatically entered into a competition to win a trip for two to the beautiful Amalfi coast, so not only would you be helping me, but you’d also have the chance to win a free holiday to Italy! How good is that?

To vote, please click HERE or click on the little badge on my home page sidebar. It only takes a jiffy.

To read more about Amara, their Interior Blog Awards, the trip to Italy, the amazing venue of the awards, and Amara’s luxury online magazine The Amara LuxPad (including their feature article on my Knutsford Apartment), click below: 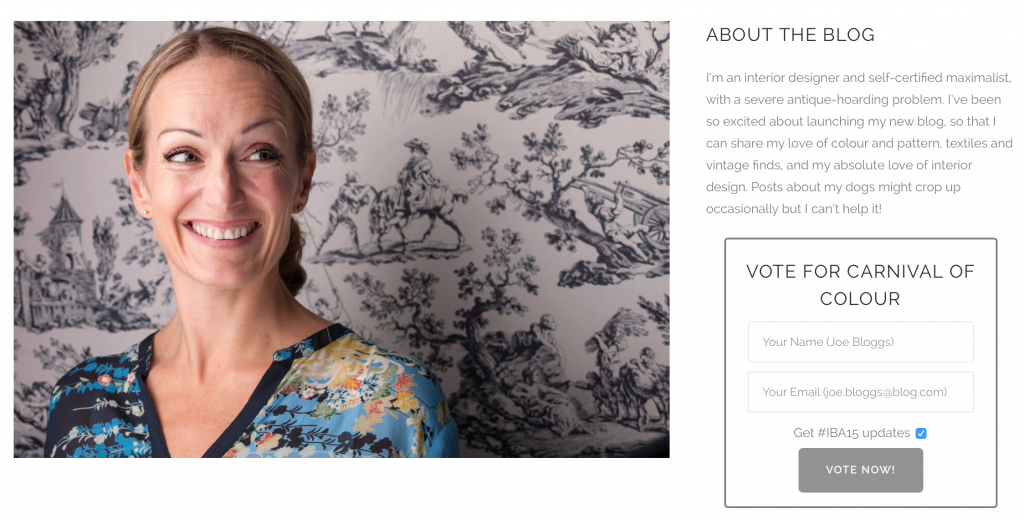 My voting screen on the Interior Blog Awards website #IBA15

I was introduced to the Amara Awards late last year, when I was gearing up to launching this blog. I wanted to find and read other inspirational interior design blogs, and so a friend who is equally as potty about interiors as I am and already an avid blog reader, pointed me in the direction of the 2014 award short-listers and winners. It became a fabulous source for me to find other like-minded people out there already blogging about their passions, but it was also obvious to me straight away what a prestigious award it was, as there were so many well known bloggers taking part in the competition. Some of my favourites from last year’s winners are Lobster and Swan, Lucy Gough and Little Big Bell, you might want to check them out if you haven’t already (the links are below); they’re all fabulous reads and really inspirational. 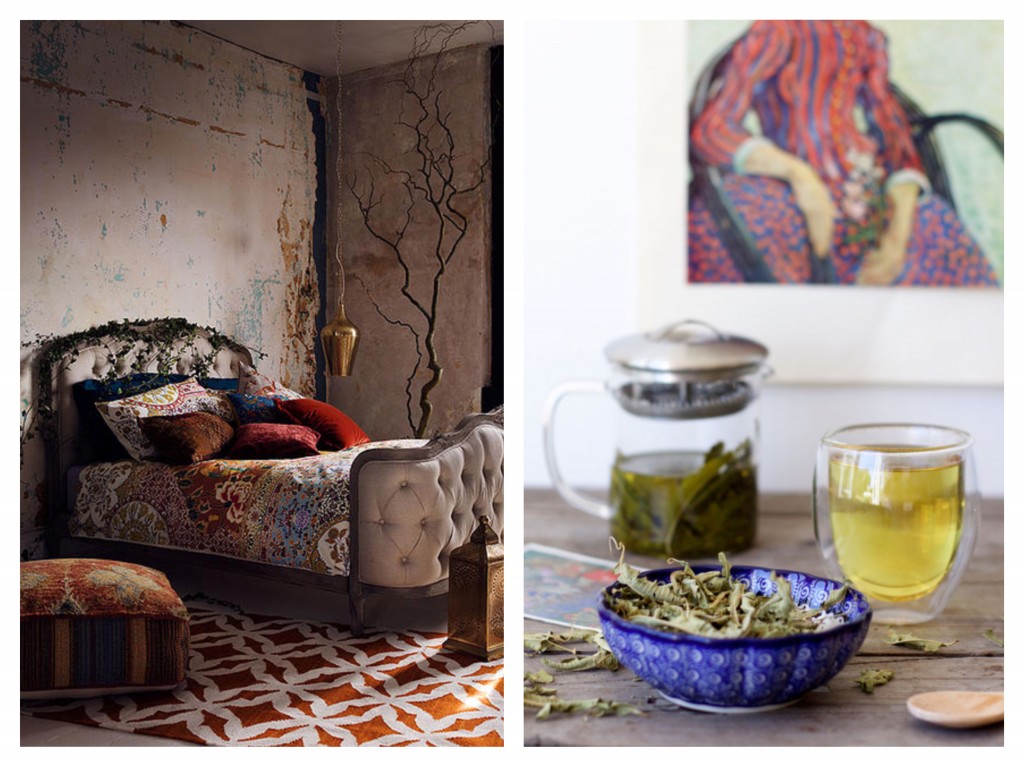 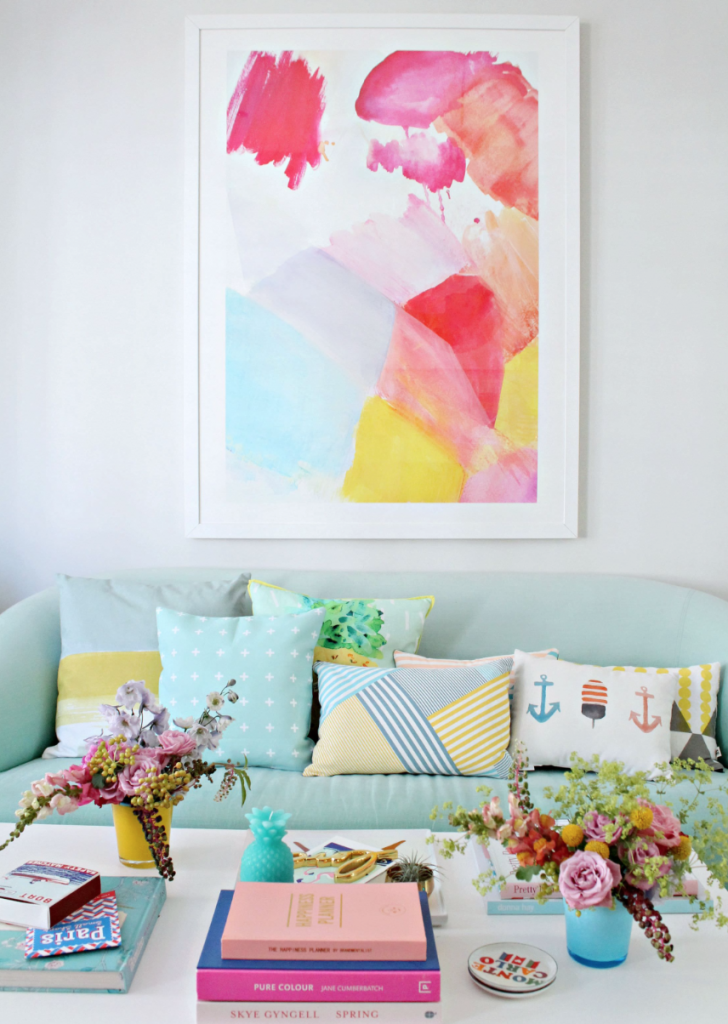 So to find myself, several months later, with my very own blog appearing in the nominations, well I’m blown away with happiness. I know I haven’t got a hope in hell of actually winning, or of even getting into the final five, and I don’t say that through any self-doubt (I’m happy with the way the blog is going) or any fake modesty; I say it through realism. The competition is fierce and I’m up against too many people who, even though they’re also newcomers, are a little bit more established and just seem to know what they’re doing far better than me! And I think I’m just too new, with too few followers to be able to call upon to vote for me. But do you know what? I don’t care! I’m just so happy to even be nominated this year, and I feel like it’s a privilege and honour to be on Amara’s website and afforded any extra exposure my website gets from this experience. It’s all good stuff. 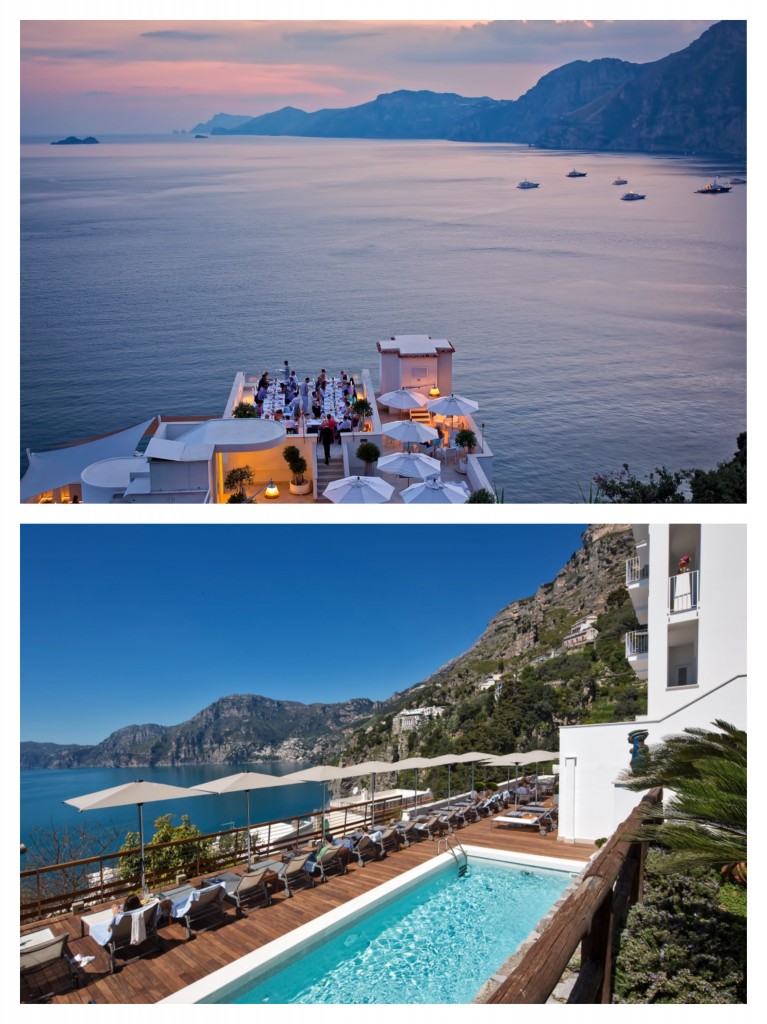 Casa Angelina on the Amalfi Coast

However, please don’t let this stop you from voting for me! As I mentioned, there is an amazing holiday to be won if you do. Amara are offering a two night stay for two at the ultimate lifestyle hotel on Italy’s romantic Amalfi Coast. The hotel and coastline are stunning (just take a look at the photos) and on Amara’s website it describes the destination as follows: “Casa Angelina peers over the glittering Gulf of Salerno and looks out towards the picturesque town of Positano and the Isle of Capri. It’s unbeatable location and stylish, contemporary design make Casa Angelina an unrivalled boutique hotel on Italy’s most glamorous coastline.” And all you have to do to be in with a chance of winning this amazing holiday is just vote (for me, for me, I’m whispering in your ear, vote for me), and you’re entered automatically. In return I will valiantly refuse to wish that it’s my husband’s vote that wins, and will instead put out good, hopeful vibes to the universe that it’s one of my supporters that nabs the freebie. 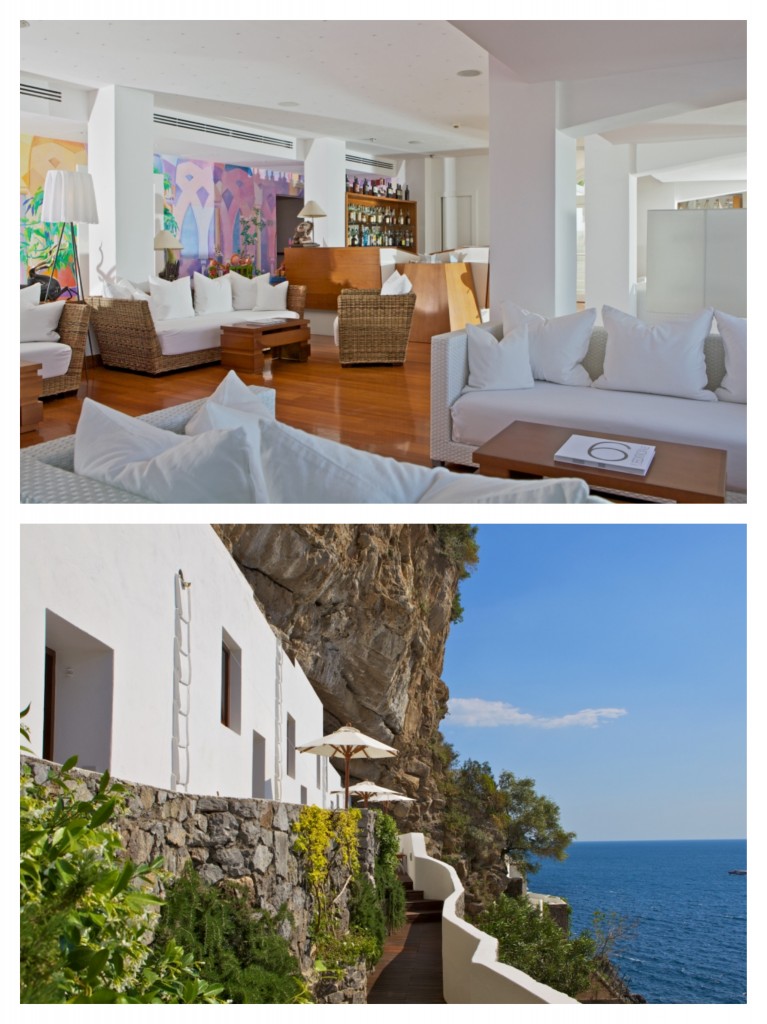 Casa Angelina on the Amalfi Coast

You might be wondering who Amara are if you’ve never heard of them. Conceived of by husband and wife team Andrew and Sam Hood, it has become the online destination for anyone wanting luxurious fashion items for their home. Established in 2005, it now houses over 300 of the world’s leading brands, with some of them having online exclusivity with Amara such as Ralph Lauren Home. Some of my favourite items can be found on there, such as the Cole & Son’s Jungle wallpaper that I used in my living room, the Ibride horse wall cabinet that I used for one of my window displays at Aunty Mabel’s Seat, and a fabric that I am longing to use but haven’t yet, Missoni’s Passiflora. Do make sure however, when visiting their website, that you don’t have anything urgent to attend to as you might be there for some time. You were warned. 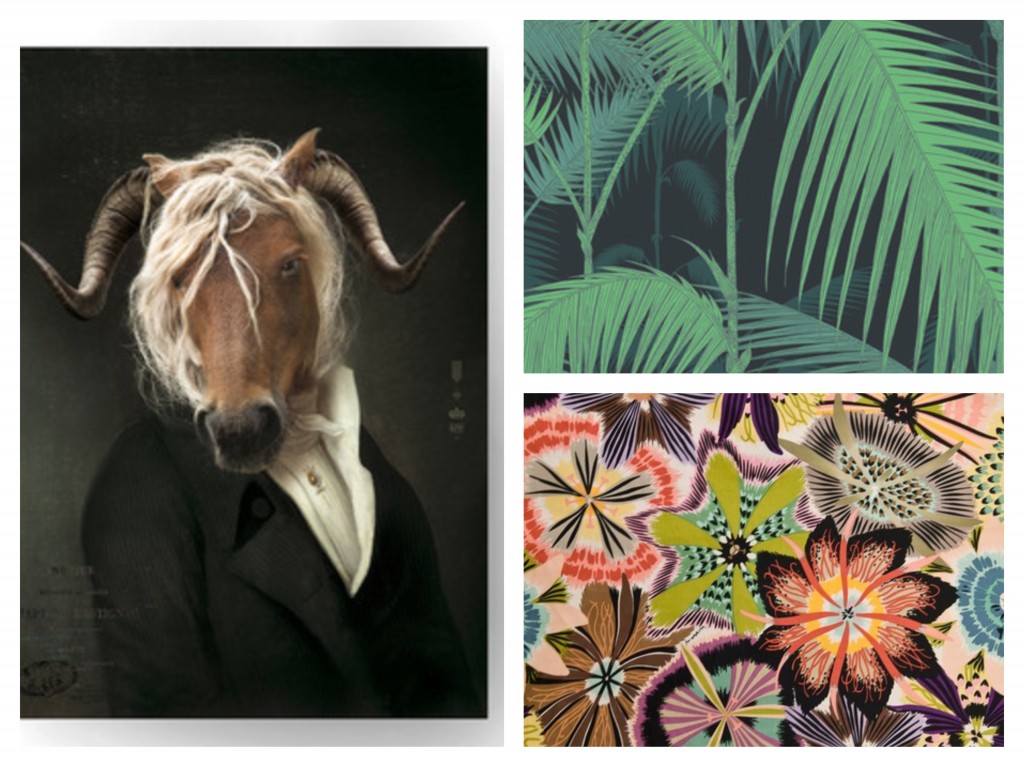 Last year, in 2014, they built on their success by launching The Amara Blog Awards, and the inaugural event held in Rosewood London’s spectacular Mirror Room was “a phenomenal success which gathered the leading talents in the interior blogging world, big name sponsors and an elite panel of judges”. This year they’re organising an even bigger and more dazzling event for their second year, and at this point, we get to one (only one mind!) of the numerous-too-many-to-mention reasons why I would be thrilled to be short-listed and attending. This year’s venue is one of my all-time favourite hotels that I’ve only ever been able to gaze at wistfully in magazines and online, and dream about going to one day: the Ham Yard Hotel in London, designed by the super talented Kit Kemp. It is so beautiful, colourful, creative and unique, that personally I don’t think they could’ve picked a better venue, it will be an amazing place to celebrate. Oh why don’t I have a million followers, I cry! *stamps foot* 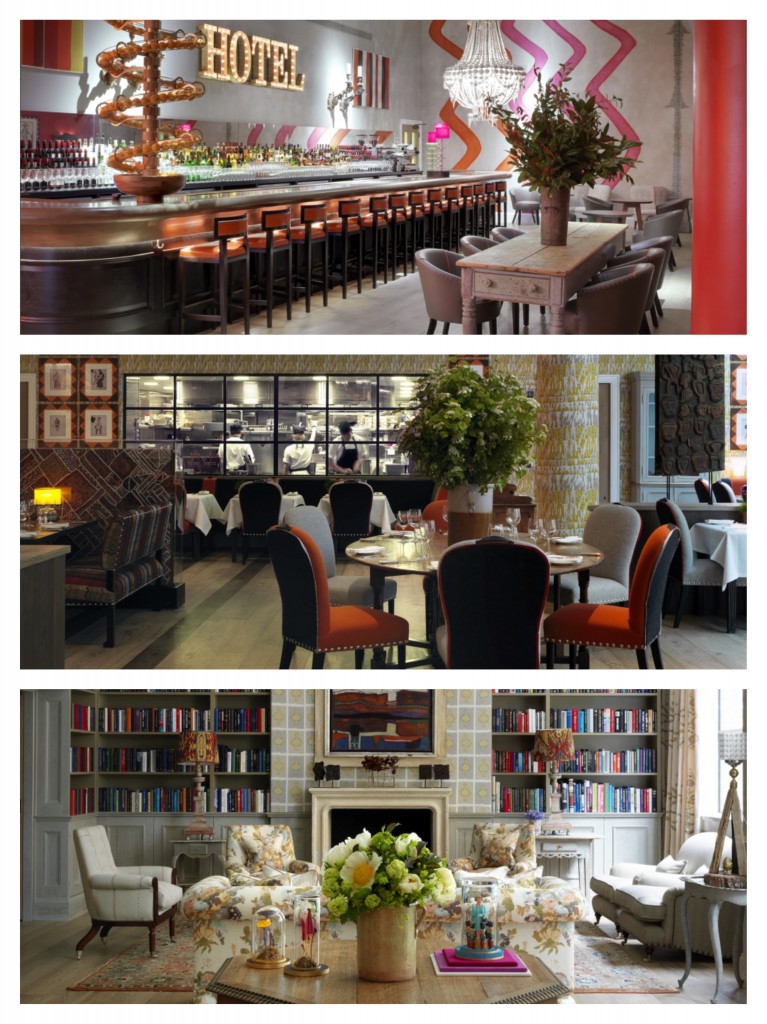 And finally, not only do Amara have this amazing online shop and organise the most prestigious interior blog award event of the year, but they also manage to squeeze in the publishing of an online magazine, The LuxPad, which “provides a discerning insight into not just the interiors & design industry but also the worlds of fashion, travel and luxury cuisine”. I can’t tell you how excited I was (excited again!) when The LuxPad approached me and asked me if I’d be interested in them featuring my Knutsford Apartment (you know the one, the one I’ve been prattling on about for the last few weeks), and I was like ‘are you sure?!’. But apparently they were, which was very lovely of them and so this week I was able to see my apartment online, which was fabulous and a little bit surreal. If you fancy checking out the article, follow this link.

So, if you’ve got to here, thank you for reading all about Amara, the Interior Blog Awards, and my nomination, and if you’ve voted for me or are intending on doing so, thank you from the bottom of my heart for taking the time to do so; I really appreciate it. And even if you don’t vote for me personally, it’s definitely worth checking out the nominations as you might find another blog you’d be interested in reading. That’s how I’m now spending my evenings now x

Our Beautiful Tilly, Rest In Peace My Darling →