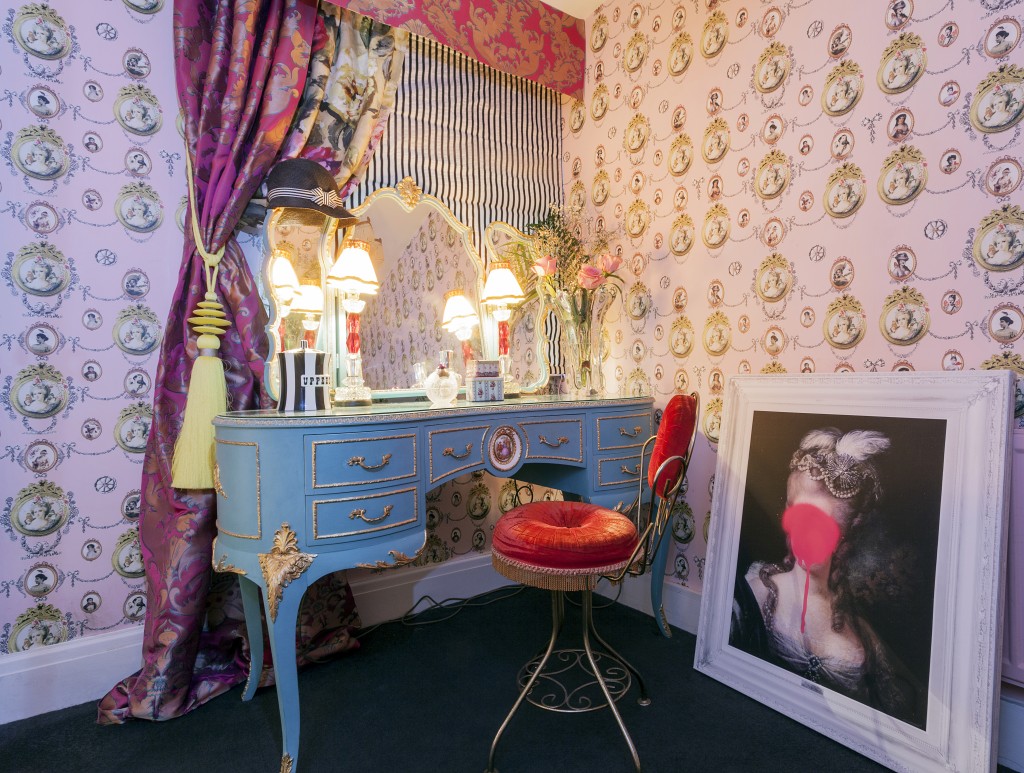 I’m continuing my house tour of the flat we lived in above the shop, with a little look at the tiny box room that became my dressing room. By now, if you’ve read the articles on my other rooms, you’ll realise that I don’t always alight on the most normal of briefs for decorating a room: the bedroom was to be a midnight garden full of animals, my kitchen a tropical shack; and it’s no different with my dressing room. I wanted it to be all French and boudoir-ey (real word), but with a bit of an edge, a punked up version, with nothing too grown up and serious. And here is how I did it, in 9 easy-ish steps:

French-style rooms are often very calm, classy and sophisticated, with grown up palettes of muted colours. So to create a more vibrant and youthful version of the style, I decided to go for colours that clash (or rather, they’re described as clashing, but they don’t really; well, I don’t think so anyway, I think they look lovely). Hot pink, baby pink, red, orange and purple were jumbled together with a splash of turquoise and a hint of acid yellow to produce a fun, uplifting and stimulating boudoir that would invigorate me in the mornings, and get me ready for the day.

The Graduate Collection’s website says their Marie Antoinette wallpaper adds ‘a splash of Victorian inspired eccentricity’, and it certainly does. From a distance is looks like a very traditional classical pattern, with cameos of Marie Antoinette and other historical figures featured within the swirls. But as you get a closer look, you realise that the characters have all been naughtily graffitied with tongue-in-cheek decoupage. The blacked out eyes, the risqué naked breast, the butterflies and mice, they all add some anti-establishment humour to the paper; and I absolutely loved it. It was quite a slow affair getting dressed for work in the morning, because if the sleepy-head status wasn’t enough, I then had interesting, beautiful paper to stare at and distract me. Luckily I work for myself, so I had nobody to shout at me if I was late.

I particularly liked the fact that the paper featured one of my all time favourite images, a black & white photograph of a tattooed Victorian lady dressed in a frock and pearls; an image I love so much that I’ve included her in my header above as she’s one of my idols. You’ll find her hanging out just underneath my turquoise gyspy caravan. She was a middle-class doctor’s wife who shocked her peers when she started getting tattoos done in her forties, and not just one but all over. You couldn’t ask for a better woman to have on your walls if you’re trying for that ever-so-common (oh alright, stop making fun of my ‘brief’) punked-up-boudoir look. 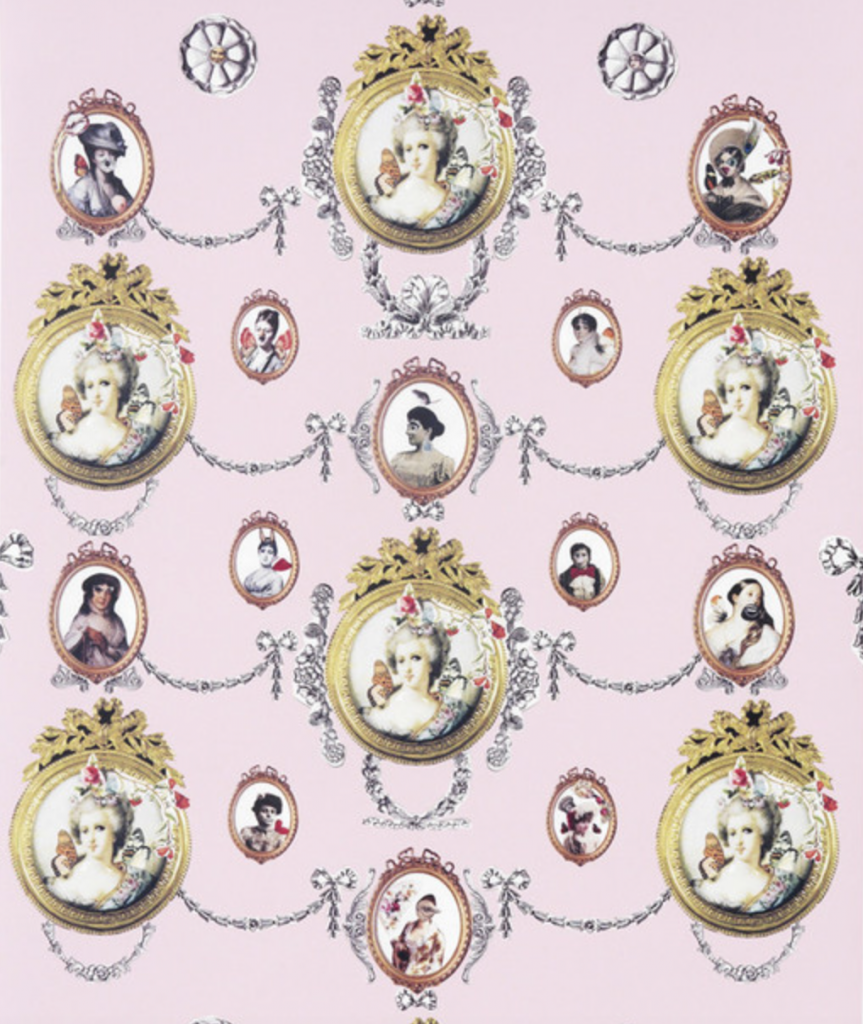 3. DAMASK WITH A DIFFERENCE

Nothing epitomises classical French decorating like silk damask curtains, it’s a textbook move. So I wasn’t going to mess with tradition and go for something untested, no, no, no; but I was going to add my own little ‘edge’ by choosing a brightly coloured non-traditional colour, maybe a shocking pink or a fluorescent orange. And that’s where my expectations ended really, brightly coloured but traditional damask. So imagine my excitement (actually don’t, it was too much) when Matthew Williamson introduced his ‘Pegasus’ fabric. Not only was it damask, and not only was it a bright pink with hints of purple & turquoise, but hidden within the pattern were some beautiful prancing horses. The horses are very subtle and not all that noticeable from a distance, but it was enough for me to know they were there and that somehow the damask was being a bit subversive (I’m a saddo, I know).

And to put the icing on the cake, I drew the curtain back with a wonderfully acidic yellow tie-back which contrasted beautifully with the fuchsia pink. 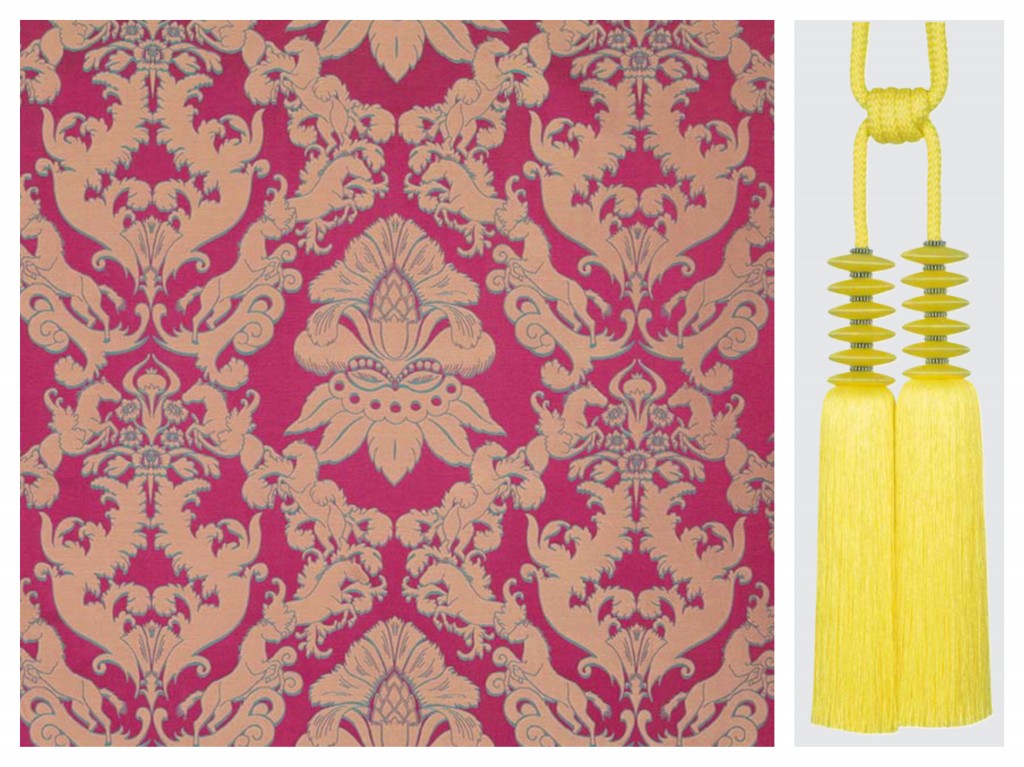 For some reason, whenever I think of a French boudoir, I think of old, faded floral fabric full of big, blousey blooms (a lot of f’s and b’s there, sorry). So I decided to use a beautiful large scale print from Designers Guild, again in more modern colours, as an under-curtain to the damask.

Over-dressing the window (2 layers of curtains and a Roman blind) was another hint to the boudoir feel, but by using such modern fabrics, it just falls short of over-the-top. Not that there’s anything wrong with OTT decor; in fact normally I positively encourage it, but here I restrained myself a little (I did!). 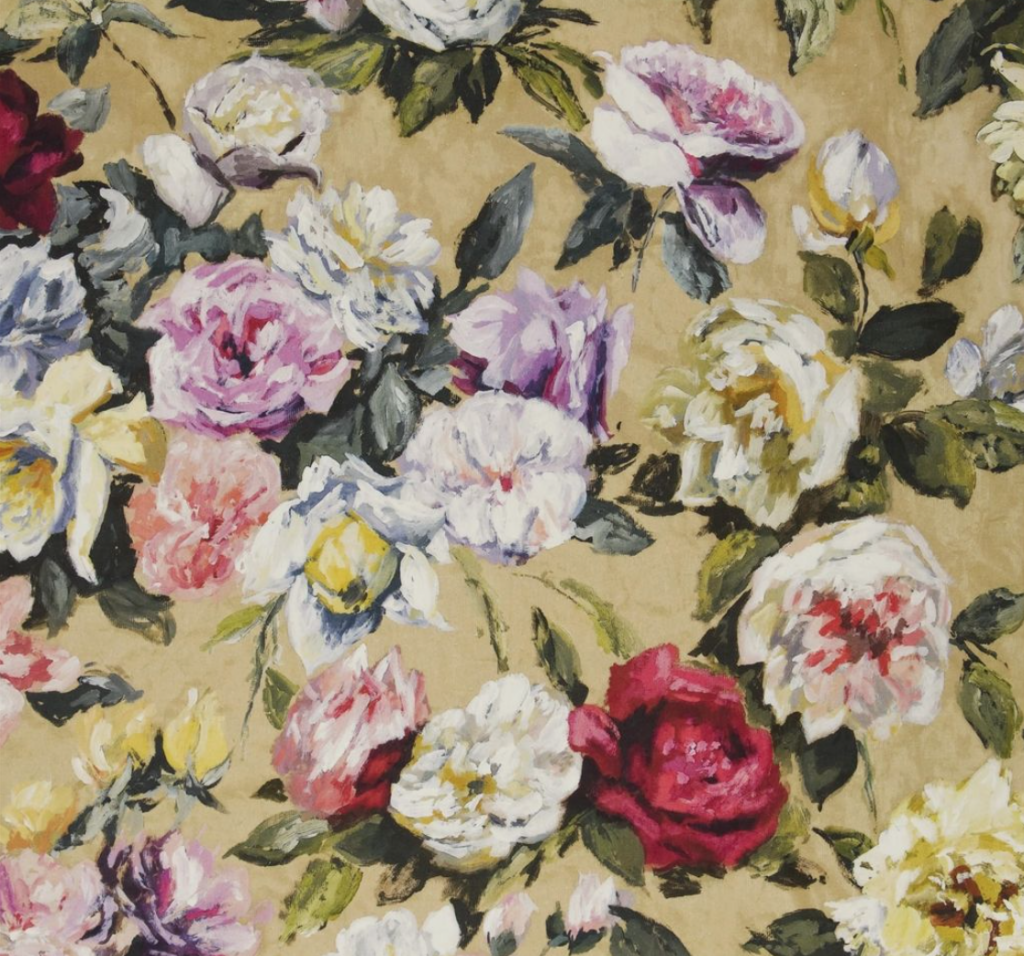 I think the simplest way of explaining kitsch is ‘pleasingly distasteful’, which is precisely the sort of furniture I wanted to use in order to make this room more punked-up, and less French. Growing up in the 80’s my Mum had this matching bedroom ‘French’ suite which when I thought I’d developed ‘taste’ in my very ‘knowledgable’ teenage years, found incredibly tacky and distasteful, and would nag my Mum about it. But what do you know? Now I love the stuff and spend a lot of time looking all over eBay for it. I chose this particular dressing table for it’s porcelain cameo of a couple, as I liked the cameo motif echoing the ones in the wallpaper, but I also felt it kicked the kitsch factor up a couple of notches. I then painted the table turquoise and painstakingly gilded it, which I don’t think I’d do again as I think gold paint would’ve looked just as good, and the gilding took forever.

I then popped a particularly kitsch dressing table stool in front of it, which fortunately didn’t need recovering as it was already in the perfect shade of red. I love this chair and it will remain with me for a long time, but it’s extremely precarious to sit on as my bottom seems to be double the size of the seat, and I’m constantly wobbling off it. The sacrifices we make for the perfect dressing room. 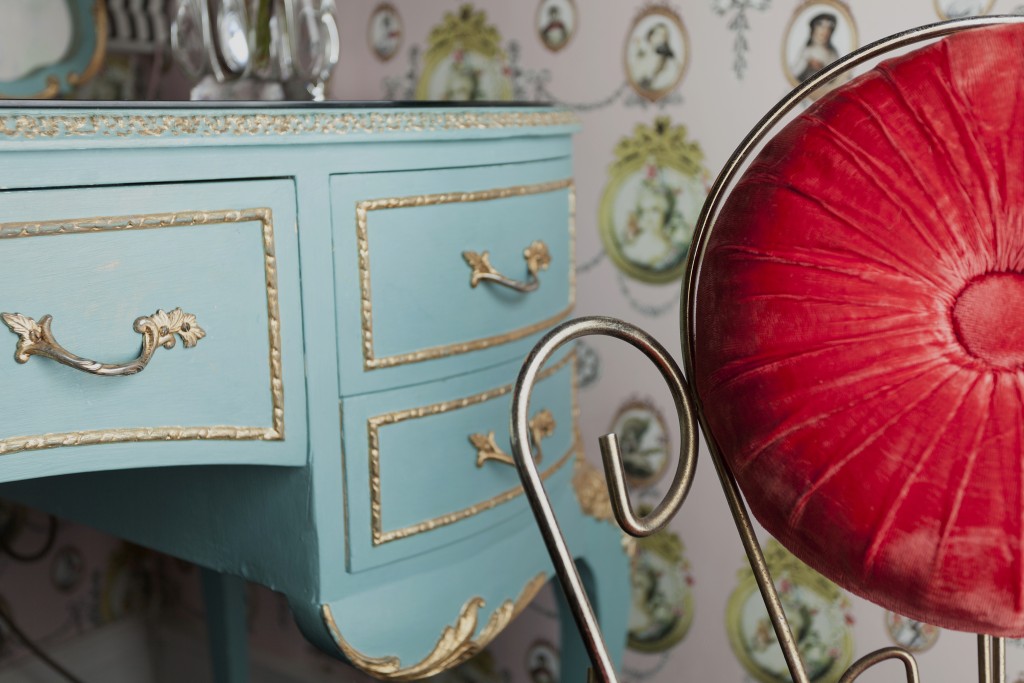 Kitsch cameo on the dressing table

I’ve always loved Designers Guild’s ‘Franchini’ black and white striped silk, I’ve used it a lot in previous schemes, but it really appealed to me for the dressing room as not only did it look gorgeous as a cute Roman blind, but it screamed French with its resemblance to the Breton stripe (think Pablo Picasso in his stripy shirt. If you don’t know the history of the Breton stripe, and why would you, but would like to, click here). Strictly speaking the French Breton stripe is navy and white, but who cares about the rules. My French stripes are black and white. And they were echoed with the Jonathan Adler striped ‘Uppers’ canister (another nod to a subversive take on decor, not that I had any uppers in them, you must understand), and my hat with it’s pretty little striped ribbon. A lovely little trio of reference to something quite subtle. 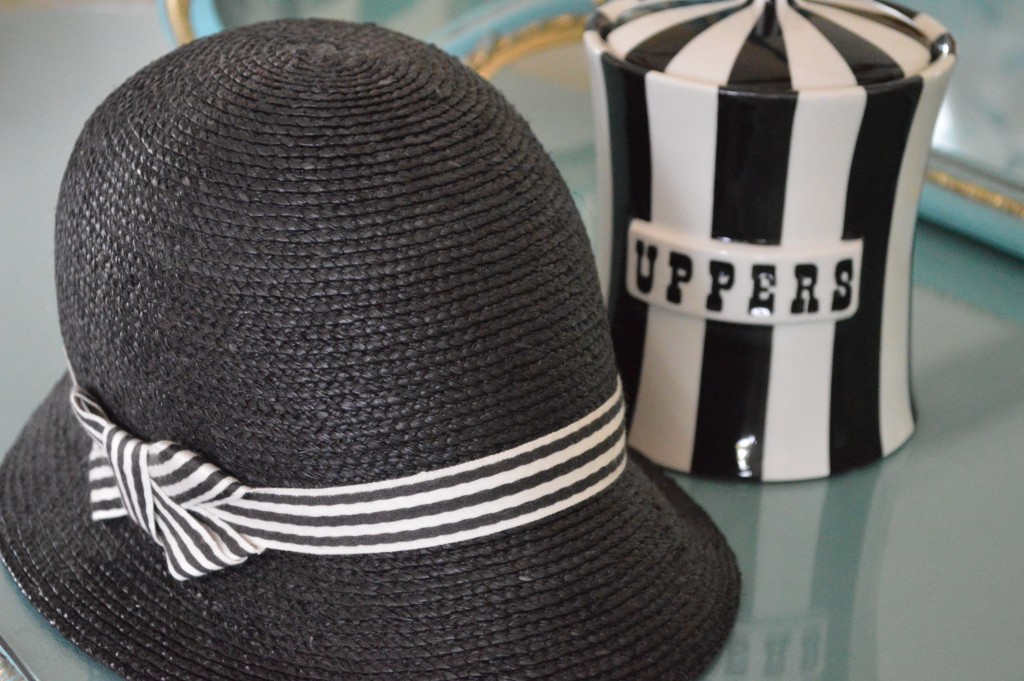 ‘Madame Blush’, the piece of artwork from Mineheart, just HAD to be used in this room, it was the LAW. Firstly, it features a lady with more than a passing resemblance to Marie Antoinette, so lots of lovely nods to the wallpaper there, but she’s also had her face blanked out with neon-pink spray-paint, which surely only an anti-establishment 18th century punk would do, had they had spray-cans back then (and beading wasn’t on the cards). 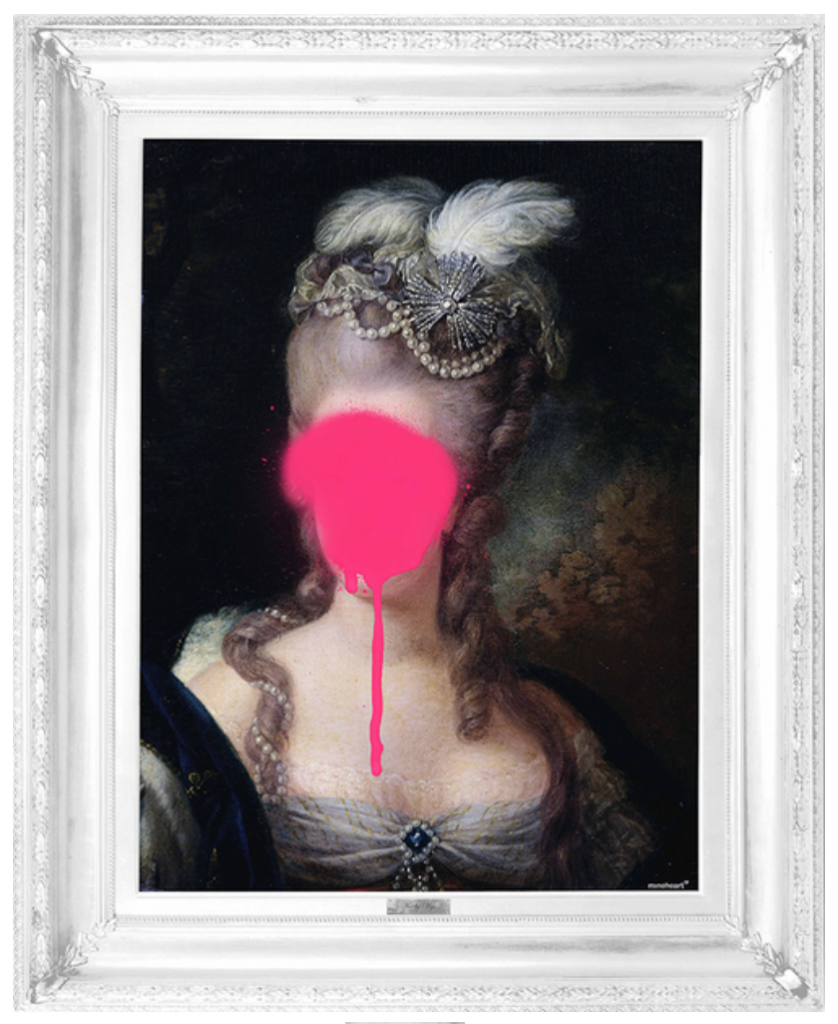 No French boudoir is complete without a chandelier and some boudoir lamps. Sadly the photographs don’t do the chandelier any justice, it’s a beautifully unusual piece with cascading pink macaroni beads, that lends just the right amount of romance to the room. Coupled with a pair of vintage red glass bohemian lamps, topped with a pair of original orange vintage lampshades found on eBay, and you have the perfect lighting for a colourful French dressing room.

Excuse the quality of the images here! 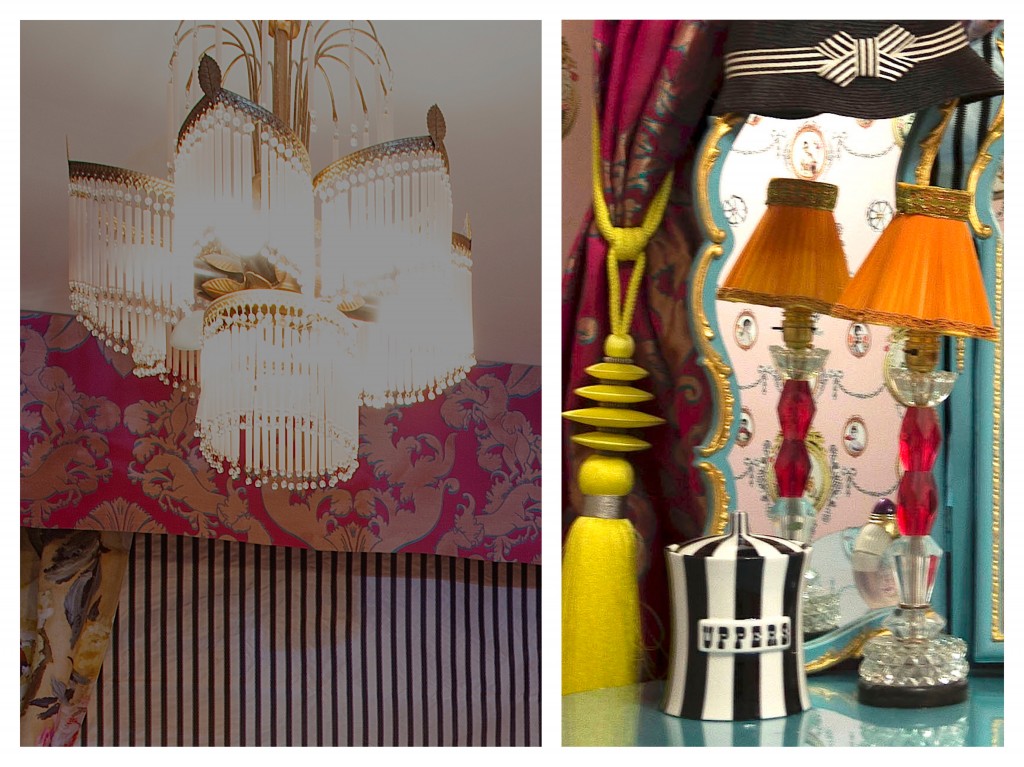 ‘Leopard rug?’ I hear you cry in bewilderment, and I completely understand your confusion as there is quite clearly NO leopard print rug in the room, no matter how many times you look at the pics. But the thing is, there should’ve been. It was on order, and was meant to be delivered on the day of the photo shoot, but sadly my chap let me down and couldn’t meet my deadline. I was gutted! It would have brought the scheme together splendidly and I’ll always feel the room was lacking a little in its absence. It was a lovely striated leopard pattern which I’ve shown in the photo below, and in the photo below that, you can see how I used it in one of my window displays at the shop, to funk up a slightly traditional country interior. It would have lent my French boudoir style dressing room that perfect punked-up edge and I’ll always be gutted it wasn’t there! *BIG SIGH* 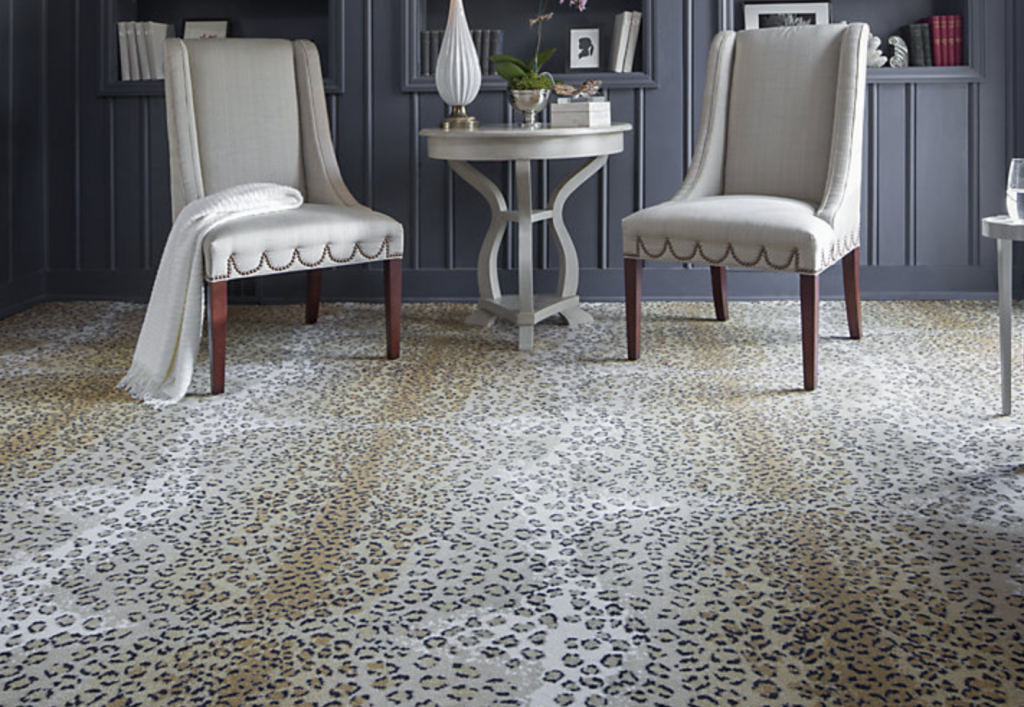 The carpet I ordered a bespoke rug to be made from 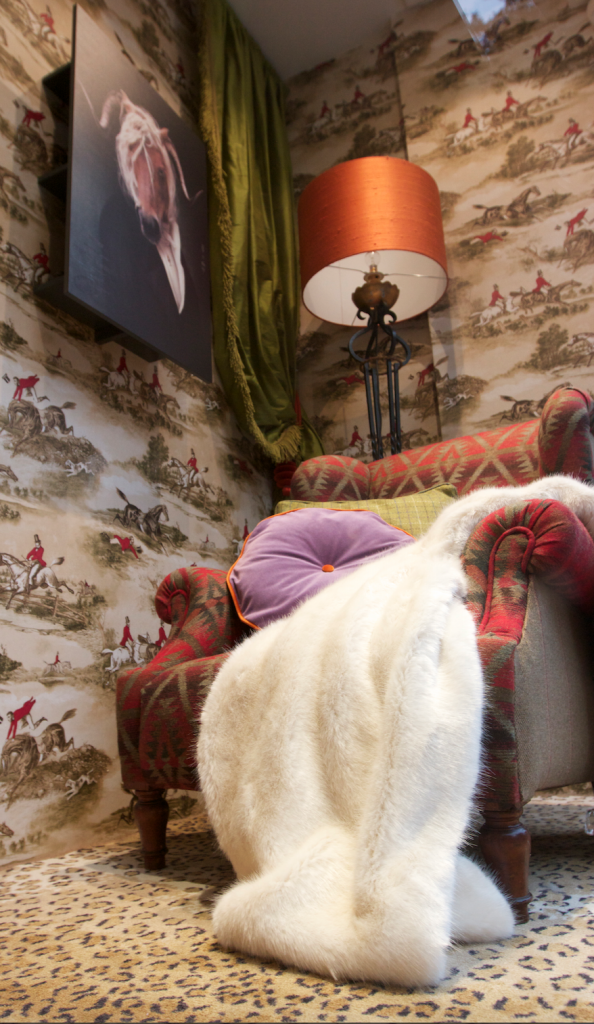 The leopard carpet used in a window display at my shop 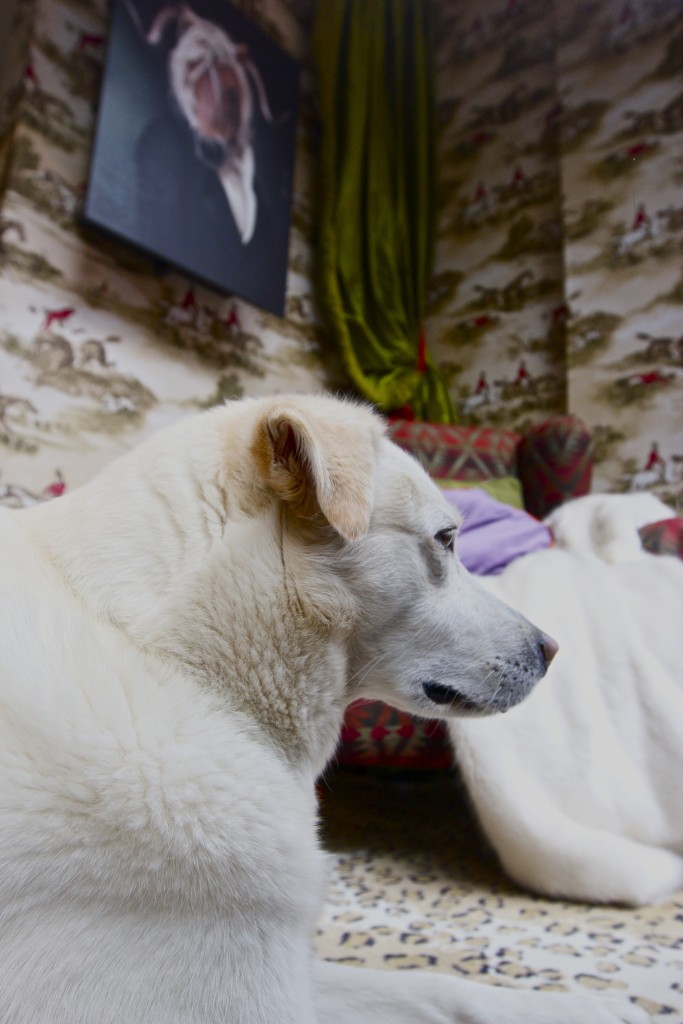 And just because she’s lovely, here’s Mabel sat on the leopard carpet (excuse the dribble coming from her nose!)

However, even without the beloved leopard rug, the room turned out exactly how I’d hoped it would, and the slightly edgy romance of it all made it a perfect place for me to put my face on in the morning, and decide which of my two outfits I’d wear that day (I have no clothes. All excess money needs to be spent on cushions & fabrics & vintage stuff on eBay). I’m not sure it particularly represented both (human) residents of the house, but I’m pretty sure, that deep down, my husband quite liked it. And I hope you do too. 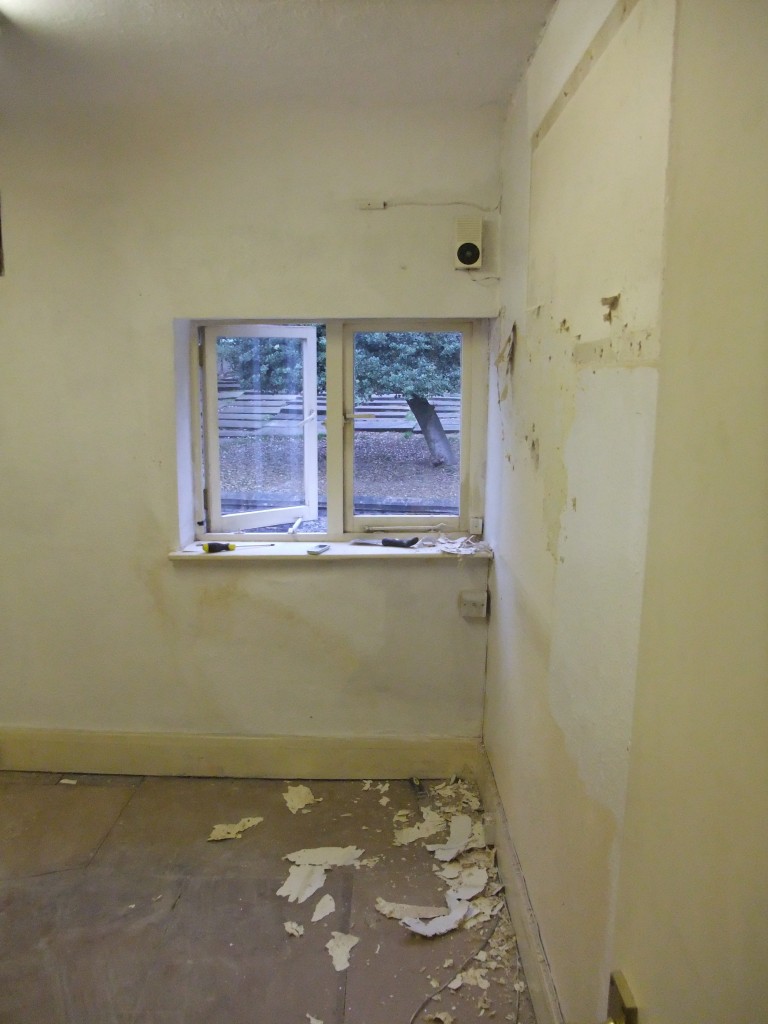 If you have decorated a dressing room, or have any gorgeous ones saved on your Pinterest board that you’d like to share with me, please feel free. And please don’t think me very grand for having a dressing room! Our flat was so small (or should I say bijoux) that we only had one main bedroom and then a little box room to the side, so I decided to promote the poor old box room to a more useful role and give it a more snazzy sounding job title to make it feel a bit more important. That’s all. But one day I dream of having a proper one, a walk-in one, with closets, and shoe drawers, and a scarf cupboard, and a jewellery station, and a……enough of that, time to go! Thanks for stopping by and I hope to see you soon for future posts x

← Our Beautiful Tilly, Rest In Peace My Darling

MY PICK OF DARK WALLPAPERS →